Alain Whyte and Gary Day reminisce about "Your Arsenal" on Facebook

Gary posted the same video today with his own lovely reminiscence. 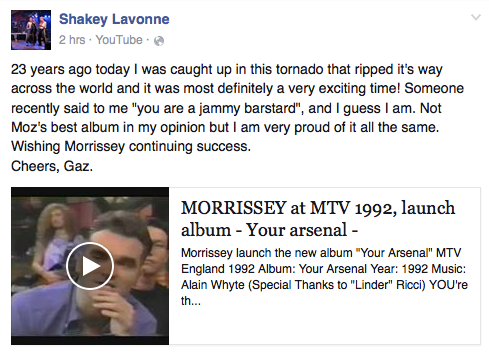 Teenage Lightning · From The Bleed
Anarchist cat owner.
A

BrummieBoy said:
I wouldn't worry too much. Trust me, they all know it's just A Job. A Gig. And like any other tradesman, they realise they are replaceable. Like lawnmower parts. Isn't it rather odd that there's no women in his band? Women have always been a warm-up, accessories to the Real Man Dad Rock finale of the night. *popcorn*

The more I think about it being a lawnmower part could explain why the drummer vents his anger on his kit at the end of the performances of late !
Whatever the reason it makes me laugh out very loud.

MozIsGod said:
This always seemed odd to me. I wonder what changed his thinking once Vauxhall happened. Maybe he considered both Bridgewood and Taylor temporary session players once he dispensed of Gary and Spencer in early '93? And that they weren't an integral part of the band? I have no idea, but I was pleasantly surprised when his band started gaining more attention in the sleeves post-Ringleader.

I believe in the 2002 Janice Long interview, Morrissey mentioned something along the lines of that the record companies didn't want to sign the band (in addition to him). Sanctuary was the one label that let him keep them rather than demand he scrap them. I'm probably not entirely correct since it was so long ago but I believe that was mentioned in one of those pre-Quarry interviews.
Click to expand...

Perhaps this is why he can't find a record deal now-because he wants to keep the band?
A

Interesting Doug said:
This is what I've wondered about his band, particularly on this tour just since I've been paying attention to setlists. Two things.

One, how can they stand to come out and play the same songs night after night after night? There's so little variation. I know that must be an issue for most bands, but with such a vast amount of material to chose from, ugh, same stuff, a few things rotating in and out, I don't know how any of them do it. I'd want to slit my wrists after a while. Composing my grocery list in my head as my fingers play the rote notes, like when you get all the way home from work on your usual route and can't remember actually having driven, or anything along the way.

Secondly, what's it like to be in a band long term, but to not get any billing? Everybody who comes to a Morrissey show is there to see Morrissey. The cheers, the swoons, the singing, it's all for Morrissey. People might say, "the band was really tight live" but it's still anonymous for the most part, and kind of a side note. We talk about individual members here but we're a hyperinterested small minority. It's not like the band is "The Stretford Poets" or even "Morrissey and the Iconoclasts," just "Morrissey," which basically means "Morrissey and whoever he needs to fill in a slot." I wonder how the band feels when people are cheering. Because I feel like if I were one of them, I'd be sort of like Bridgwood here and just not feel like I was really there or that it had much to do with me. I'm not sure that he and I are necessarily talking about the same thing, but that's how I'd feel.

I mean look at Boz. Been around for decades, musical director, lots of songwriting credits, etc., but zero billing. He does his own things at other times, but it must stink to just be in the background as everyone stretches out their arms to try to touch Morrissey. If somebody else had filled in for him on Jimmy Fallon, the average non-hardcore-fan person at home would have no idea he was missing. How does that feel? It obviously must provide some kind of satisfaction or neither he nor any longtime band member would keep at it, and obviously the show can't happen without them and it really matters to the audience experience whether they play well or not. But I always imagine there's sort of a sad reconciliation point they must reach where they just have to acknowledge most people don't notice them and aren't there to see them and they could be pretty easily replaced without a loss of continuity noticeable to the bulk of listeners.

Maybe someone like Boz is key enough that it would throw things off badly for a while, but I still think they could get a whole new crop in there to learn and play the songs just fine and it would still be the Morrissey show and the new people would be in the shadow as much as the old. I just wonder how that feels when they put in so much work to make each show work.
Click to expand...

um ia about your second point, but didn't the same thing happened with The Smiths. A lot of people didn't/don't care for Joyce and Rourke

Anonymous said:
um ia about your second point, but didn't the same thing happened with The Smiths. A lot of people didn't/don't care for Joyce and Rourke
Click to expand...

I wasn't aware of that. About the only vibe I got about them from various writeups and stuff was that they were overshadowed by the ultra magnified personality of Morrissey and the signature sound and focus on Johnny. Rhythm sections are usually the unsung ones in any band but I hadn't been aware that people didn't care for them. They seemed so gracious in this one old video piece I saw on the band. They seemed glad to be there and understood that the focus was going to be on the other guys.

Anonymous said:
um ia about your second point, but didn't the same thing happened with The Smiths. A lot of people didn't/don't care for Joyce and Rourke
Click to expand...

I think it's reasonable to assume that most of the ire, held in some quarters, is reserved for Mike Joyce and latterly in the wake of the court case.
You must log in or register to reply here.