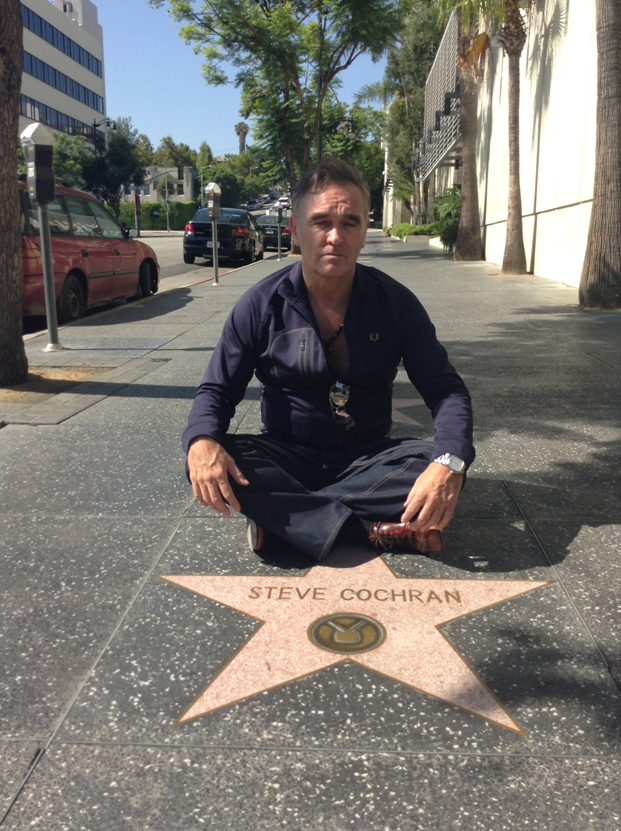 As previously noted by Tingle in this 2003 thread, Morrissey was named after the actor Steve Cochran.
Last edited: May 15, 2016
Click to expand...

great pic though by boy racer Cochran is a mistake, many other would've fit

but it's not about the streetname golden stars lane, Morrissey looks relaxed

ps my comment about Cochran was mistaken by that hollywood hills racer in movies,
and as James Dean he crashed a few weeks ago with a friend , he didn't survive.
I shoul've known cause I think that actor hasn't a star on that Hollywood star lane, he was
about 40, sad, but movie driver hero is different than the real world, and I remember he was on the passenger seat, tragic.

No Spanish version? You would have thought that would be the biggest market after English.
A

Iona Mink said:
Hey Kewpie, guess what? I haven't read it either. I know! It's incredible.

You'll find it isn't compulsory. There won't be an exam at the end.
Click to expand...

Now I know why I never took you seriously.
[SIGPIC][/SIGPIC]

Playcat2000 said:
Now I know why I never took you seriously.
Click to expand...

Honey, the only place I would take you is a gas chamber.
R

The Steve Cochran's star can be found at 1750 Vine St Hollywood, CA. Right by the Capitol Records building.

The Walk of Fame website incorrectly has it at 1750 Hollywood Blvd.
A

Vegan shoes are available everywhere now, and they look like leather.You can't judge if you don't know for sure.
A

I want to thank David for his efforts on this beautiful, but sometimes honest site. A fan since 1997, Hate me or Love Me, Keep supporting Mozzer. "Years of Refusal" was fantastique Moz. ENCORE PLUS MON AMI.

The lack of a Spanish translation has been bugging me for days, it makes no sense.

Maybe something special is planned for la edición en Español.

CrystalGeezer said:
The lack of a Spanish translation has been bugging me for days, it makes no sense.

Maybe something special is planned for la edición en Español.
Click to expand...

Lets hope so. But for now his Mexican fans are going “wtf”?!!
[SIGPIC][/SIGPIC]
A

Agreed on taking a break, I rather see him
In 4 years in good spirits than to see him
With a "just paying the bills " attitude .
A

Ready With Ready-Wit said:
The Steve Cochran's star can be found at 1750 Vine St Hollywood, CA. Right by the Capitol Records building.

Interesting in retrospect as it is right in front of the building according the Google street view:
https://maps.google.com/maps?q=1750...=BOmRztL0hiBOZDryiieIbQ&cbp=13,97.16,,0,-9.45
You must log in or register to reply here.

faroutmagazine.co.uk - Morrissey makes US TV debut on an infamous episode of The Tonight Show in 1991