A service will be held in Dublin where Elizabeth was born. "All my life's buried here … heap earth upon it."

"Anyone wishing to send flowers for Elizabeth Dwyer can have them delivered to the gates of Beechmount, Bowdon Road, Bowdon, Altrincham, Cheshire, WA142AJ, England."

MESSAGES FROM MORRISSEY - MORRISSEY CENTRAL - FLOWERS AND NOTES BEING PLACED IN THE GATE OF ELIZABETH DWYER'S HOME, MAY SHE REST IN PEACE

My dear Moz. I am so sorry to hear your sad news. Words seem trite at times like this. But please know I am sending you love and light and strength to go forward. Take care.
Always.

Anonymous said:
Sam's requesting that people attend and I can understand why. When my dad died my family wanted as many people as possible at his funeral - which we ended up getting. It really helped us with our grief to know that lots of people respected and loved him and wanted to be there for him and us, and we felt like he ended up getting the recognition he deserved but was too humble in life to seek.
Click to expand...

Nowadays it's not that easy to attend a funeral with max 200 outdoors. The police will intervene if there are large crowds. And they'll be expecting large crowds.
A

Anonymous said:
Sam's requesting that people attend and I can understand why. When my dad died my family wanted as many people as possible at his funeral - which we ended up getting. It really helped us with our grief to know that lots of people respected and loved him and wanted to be there for him and us, and we felt like he ended up getting the recognition he deserved but was too humble in life to seek.
Click to expand...

It's not possible to attend. 50 maximum attendees at a funeral in ireland and anyone arriving in ireland has to quarantine for 14 days.

As much as it would be great for Sam to have 100s of people there I think that may be him personally stating that for himself. I'm not convinced Morrissey would want any fans around watching his every move at this time. Grief is private.

Aside from the fact it is irresponsible to put a notice out telling people to attend a funeral in the middle of a pandemic unless more deaths are the objective.

Guidelines on the Ireland official site:

"Do not include the funeral arrangements in the death notice. You can share this information privately with close family members (and anyone the deceased person was living with)."

Mama, mama and teddy bear
Were the first full firm spectrum of time
Now my hurling days are done
And there's no one to tell and there's nowhere to run...

Rest in Peace Elizabeth Dwyer.
B

The photo of his mother on the beach is great. Her eyes closed so serenely, the soft blurred flock of submerged figures behind her, perhaps friends and family, like Anthony Gromley's figures on Crosby beach, they gather, much further out than we thought. I can feel the breeze on my face too, the sound of the sea and the chattering gulls calling out, as the sea gently meets the beach. Time and tide, side by side, all washed in and all washed out and the solitary child stands behind her, with hands on hips, echoing her. Is it her past or her future looking on? Held forever but also gone gone gone.

For whatever we lose(like a you or a me)
it's always ourselves we find in the sea.

The former Smiths frontman confirmed the sad news in a message on Morrissey Central this morning.

He had asked for people to pray and hope for the Crumlin woman's recovery in a message six days ago.

Elizabeth's funeral mass is set to take place in Dublin in the near future, with Morrissey saying that "all are welcome" to celebrate his beloved's mother's life.

She is understood to have been in her 80s.

The message from Morrissey reads: "Morrissey's very beloved mother - and best friend, Elizabeth Dwyer, has passed away.
"A service will be held in Dublin where Elizabeth was born."
"All are welcome."

A librarian, Elizabeth Anne Dwyer was born in Holles Street hospital, and was very close to her musician son.

She was often recognised by fans due to her attendance at his gigs throughout the decades.

Six days ago, in a message to fans, Morrissey said: "With this broken voice I beseech you, my friends, to offer prayers of hope and prayers of intercession for the recovery of Elizabeth Anne Dwyer, who is my mother, who is in trouble, and who is the sole reason for all the good and motivational things in my life.

"I ask particularly my friends in Chile, Mexico, Italy, Peru, Paraguay, Brazil, the United States, Ecuador, Israel and Ireland to offer their prayers for Elizabeth - for she is all I have, and our collective pleas of petition might wake the sleeping gods.

"She is me, and without her vahaan koee kal hal … there is no tomorrow. I ask no more of you… for there could be no more to ask."

Funeral details are expected to be released in the coming days." Regards,
FWD.
Stealing things from the Internet - so you don't have to.
B

AztecCamera said:
I reckon you sick delusional anti-American anti-Roman Catholic terrorists need to stop referring to her as "sod" "mum" mam". The California Mom hated you people. I am so happy she never found out that you sociopaths had delusional fantasies that she lived in Mankfester or Waldo Range or anywhere but Moz Angeles. Where do you think that photo of her was taken? She can rest in peace. She had to sit in a "box" away from you people instead of being backstage with Nancy because she could not stand the sight of being up close to you. The California Son's mom and dad moved from Dublin to LA and opened Morrissey's Catholic Gifts in the San Fernando Valley. We would go there and buy our materials for Catechism and I always remember the poster she had at the cash register that said INGLAND OUT OF IRELAND! She was so happy when she made enough money to buy her California Son his first basketball and hoop in the front yard. In the immortal words of the California Mom....GO HOME!!!
inn nn nnnnnn nnnnnn n it.
Click to expand...

Your gimmick is frustrating and annoying at the best of times. To trot it out when the closest person in Morrissey's life has died is a bit f***ing odd, if I am honest with you.
"Maybe if I was an anarchist and had a signed copy of Kimono My House or something you'd sleep with me" ​ The former Smiths frontman has revealed his mother and "best friend" has sadly passed away, and a service for her will take place in Dublin.

www.radiox.co.uk
Stealing things from the Internet - so you don't have to.

Anonymous said:
I get what you mean notawoman. I'm sorry others don't.
Click to expand...

Thanks
Thursday is pathetic.

All the strength in the world to Morrissey and the family.

I hope people will stay away from the funeral, though. Think of the anxiety it will cause local people if there is a crowd.
2

Sorry for your loss, Morrissey.
M

“In the treasury-house of your soul, there are infinitely precious things, that may not be taken from you. Oscar Wilde
I am so very sorry to hear of the sad loss of a beloved Mother,my thoughts and Deepest Sympathy are with You and Your Family at this sad time.I hope that Happy and Beloved memories comfort you All.x
B

So very sorry to hear of your sad news morrissey, my heart goes out to you at this difficult time, you are forever in my thoughts.
C

This will finish him off.
J

Dear Morrissey, I am so sorry to hear the sad news about your Mother.
I can only imagine the overwhelming torrent of emotions you may be feeling.
I hope you can gather strength from your memories to help you get by.
A wise soul once said to me "Remember you are never alone, even when you feel that you are"
Sending love & light always

There is another world
There is a better world
Well, there must be...
B

Dear Morrissey and Family,
I am deeply saddened to hear about the passing of your beloved mother. She seemed like a lovely, wonderful person who was wholeheartedly devoted to her family. I found this poem in a book I have recently read and wanted to share it here:

“ Others were taken, yes I know
But you were mine, I loved you so.
A prayer, a tear till the end of time,
For a loving friend I was proud to call mine.
To a beautiful life a sad, sad end,
You died as you lived, everyone’s friend.”

Sending you all lots of love always

GirlAfraidWillNeverLearn said:
The quote is taken from Wilde's Requiescat, which Morrissey is seen chewing on here, ca. 1985.
Oscar wrote it for his sister Isola, who died at the age of 9.


Tread lightly, she is near
Under the snow,
Speak gently, she can hear
The daisies grow.

All her bright golden hair
Tarnished with rust,
She that was young and fair
Fallen to dust.

Lily-like, white as snow,
She hardly knew
She was a woman, so
Sweetly she grew.

Coffin-board, heavy stone,
Lie on her breast;
I vex my heart alone,
She is at rest.

Peace, peace; she cannot hear
Lyre or sonnet;
All my life's buried here,
Heap earth upon it

​
It was of course Elizabeth who introduced him to Oscar's work.
Click to expand... 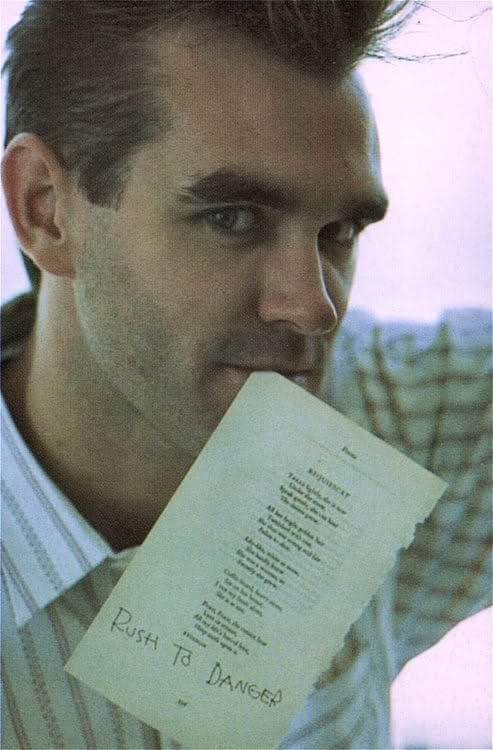 I didn't expect her death to hit me so hard. My thoughts are with Morrissey and his family.