Edinburgh International Film Festival is delighted to announce that ENGLAND IS MINE will close the 71st edition of the Festival on Sunday 2nd July, 2017 at Festival Theatre, Edinburgh.

ENGLAND IS MINE takes audiences back to 1970s Manchester, where Steven Morrissey (Jack Lowden – Dunkirk, A United Kingdom, ’71), an introverted, uncompromising teenager, finds himself frustrated with his working-class existence.

With dreams of a successful music career being dampened by his run-of-the-mill job at the local tax office, Steven finds solace in the city’s underground gig scene where he meets Linder Sterling (Jessica Brown Findlay – Downton Abbey, The Riot Club) – an intelligent, self-assured artist – who encourages him to make his ideas of superstardom a reality.

Culminating in his first meeting with Johnny Marr, ENGLAND IS MINE, is a feature length biopic based on the early life of Morrissey, the outspoken former lead singer of seminal British band The Smiths. The film is directed by Academy Award® and BAFTA Award nominee Mark Gill (The Voorman Problem) and produced by Baldwin Li (The Voorman Problem) and Orian Williams (Control). Key cast will be in attendance on Closing night.

EIFF Artistic Director Mark Adams said: “Morrissey is one of Britain’s most iconic artists, and this delve into his formative years is a witty and enthralling look at a great music talent. The world premiere of ENGLAND IS MINE will be a perfect way to wrap this year’s Festival.”

Tickets will go on sale at 10 am on Friday 12 May through the EIFF website. For more information visit www.edfilmfest.org.uk. 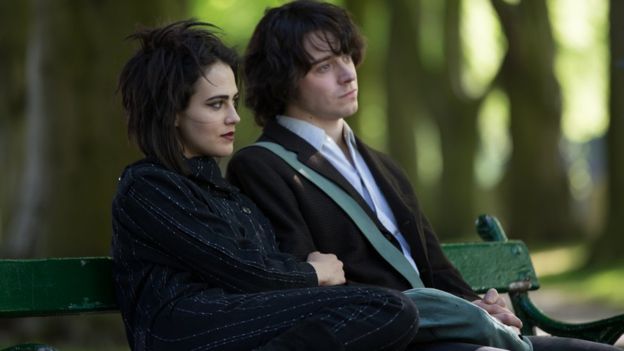 Jessica Brown Findlay plays Linder Sterling, an artist who encourages Morrissey
Last edited by a moderator: May 11, 2017
Click to expand...
A
Written by

If 2017 Morrissey could tell 1979 Morrisey that they would be making a major motion picture of his early adulthood to be viewed at a Festival....obviously he would never believe it. I would like to think Morrissey is now comfortable with himself and maybe even laugh about it.
A

Yeah, the pictures look cute and all, but how can the producers have no interest in Morrissey's input? That just seems beyond rude.

Well, it can't possibly be as bad as King Charles III, which I watched a little over half of last night. It's fictional, but based on real people. The characters speak in Shakespearean language. And the story line (king with a conscience) was already done on the Royals.


CrystalGeezer said:
I hope they invite him to watch a copy at home before a zillion people ask him questions about it. What a nightmare to have a movie made about your personal life while you're alive and have nobody reference YOU about it. Fame sucks ass.
Click to expand...

An amusing and evocative portrait of singer-songwriter Steven Patrick Morrissey, focused on his young adult years in Manchester. Set in the 1970s as his ambitions to be a musician developed, but before he went on to become lead singer of seminal 1980s band The Smiths, this is Morrissey (beautifully played by rising star Jack Lowden) brimming with youthful arrogance, but searching to find his place in the musical world.

A would-be writer, he sends letter after letter to the New Musical Express, but finds himself forced to take a job at the local tax office to help his family. He is constantly taking time off to spend time with London-bound local art student Linder (an entrancing Jessica Brown Findlay) or hiding on the office roof to write lyrics. Made with a wonderfully wry sense of humour, it presents a fish-out-of-water Morrissey, intent on railing on those around him, but also too shy and insecure at times to break from the mainstream.

There are delicious moments of humour – especially when co-worker Christine (Jodie Comer) essentially blackmails him into dating her – as Morrissey struggles to find his musical mojo, plus a great sense of time and place within the Manchester music scene. The film is an unauthorised portrait of the young Morrisey, exploring his musical influences, ambition, disappointments, depression and creativity, ending just as he and guitarist Johnny Marr finally get together with a view to setting up a band.

The title comes from The Smiths’ classic hit Still Ill ('England is mine, and it owes me a living. Ask me why and I'll spit in your eye'), written by Morrissey and Marr, and perfectly reflecting his ambitions, frustrations and eventual determination to become the artist he always knows, deep down, he is destined to be.

^ jesus. Let's hope someday a film is made about M's pre-Smith years.

Who would play you in a film of your life?

I cannot be replicated.

Roger O'Donnell (The Cure) - executive producer of "England Is Mine"
2

Jul 25, 2017
URBANUS
U
I
How the new Morrissey biopic England is Mine was designed - Design Week