Morrissey with an important appeal to President Andrzej Duda
In the "Now Rock" granted to the interview, Morrissey touched on many topics that were important to him - not only musical but also world-view. He even appealed to the president of our country.

Morrissey is one of the heroes of the September issue of "Teraz Rocka", which since yesterday is available for sale. The artist was interviewed by our editor, Jacek Nizinkiewicz , and the men talked about many issues important to the music - including his health condition, "This Is Morrissey" compilation , as well as plans for coming to Poland.

The September 'Teraz Rock' is now on sale

At the end of the conversation, the subject of Morrissey's veganism and quite sharp views, which he voices in this regard:

You have been a vegan for a long time and defend animal rights. During one of the concerts in Poland, you talked about the KFC network as Kentucky f***ing Chicken. Meanwhile, in Poland it is a popular fastfood, which even President Andrzej Duda comes to.

I would like to remind him that the meat industry is the biggest threat to the environment. If you eat at KFC, you support abuses in the field of environmental protection. It's worth being part of the vegan world, not McDonald's.

Morrissey also admitted that the media - especially the British ones - are very unfair to him, but he is grateful to the fans for their support. This and much more, however, you will find in a conversation published in the latest "Teraz Rocka" . 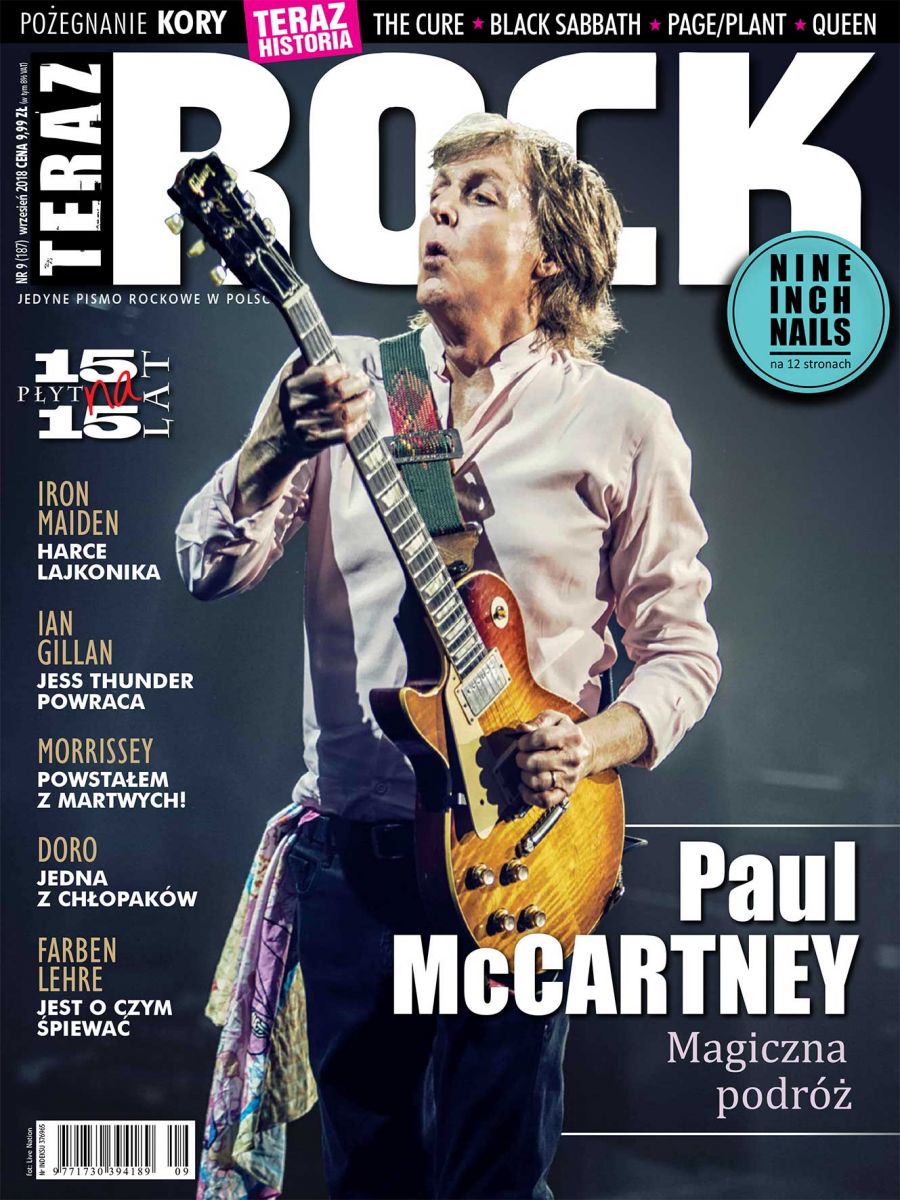 Oh my god. it's Robby! said:
So yeah, as for Moz “being racist” I assume when he stops saying things that many interpret as racist or supporting politics of that vein, well, then some of us won’t be of the opinion that he’s the noun “racist” anymore.
However, it’s just that, an opinion, but at least he can stop being racist and he should be thankful for that, not all of us are so lucky.
For example, I killed people many, many years ago, and so I will always be a killer. No matter how fat, old, blind, peace loving I get, I did that, but in a less racist world?
Maybe more young men won’t go through that as well.
Racism does not exist in some vacuum, it’s the father of violence and ultimately war

Well, interpretations of what was said and having an opinion is one thing. But to claim that a person did make a statement declaring to the world that they are racist and that this event actually happened and so it is a fact, is something entirely different.

violence begins on the dinner plate, and people are conditioned/desensitized at a very early age.

Ketamine Sun said:
Well, interpretations of what was said and having an opinion is one thing. But to claim that a person did make a statement declaring to the world that they are racist and that this event actually happened and so it is a fact, is something entirely different.

violence begins on the dinner plate, and people are conditioned at a very early age.
Click to expand...

I think Skinny defend himself, you want to nitpick between adjectives and nouns, go for it I guess

The sort of garbage par for the course these days here now
& of course you are entitled to your opinion about where violence begins, but sorry, I can easily imagine a world where no one eats animals but war and poverty abound.

Oh my god. it's Robby! said:
& of course you are entitled to your opinion about where violence begins, but sorry, I can easily imagine a world where no one eats animals but war and poverty abound.

How do you explain lazy chubby white dudes like Skinny on assistance? He is exploiting us the tax payer.

Ok, now your just trolling for a response dude, I think Dr. King put it succinctly but hey, you wanna rip a guy murdered by a racist a new one, while after only recently arguing that Moz is not racist like at all
be my guest

Ugly Devil said:
And the decrepit turd floats back to the surface to regurgitate the same piffle. Only through Maths and Science can anything be proven as factual.
Click to expand...

How would you set about proving that?

Oh my god. it's Robby! said:
Ok, now your just trolling for a response dude, I think Dr. King put it succinctly but hey, you wanna rip a guy murdered by a racist a new one, while after only recently arguing that Moz is not racist like at all
be my guest

i deleted that before you replied because I knew some nut job would misread my post.
No I agree with the quote, but was just saying that it's more complicated than that. THAT IS ALL.

Halloway said:
Well whose fault is that? The right-wing press is never going to like him and having apparently gone out of his way to alienate the Guardian and Independent, he now has managed to antagonise the entire spectrum of the UK national press.

He really must learn that if he is going to keep saying 'f*** off' to the British press, they are going to respond in kind.
Click to expand...

What press? Its just prejudice
U

People should pay for their water and will in a near future cause far too many have running water on tap they pay very little or nothing for but tap water is harmful to any living creature so everyone should of course buy their water like kidney patients have to in order to survive at all.
The harmful plastic was gone long ago and look at the bottom to see a number that reveals if it is made of plastic that is not harmful to humans and it should have been removed world wide by now.
KFC was great in England but in Sweden the quality is really low and there is no secret that black people tend to eat chicken a bit too much which is really bad for the environment so it is time we included them in this debate cause they seem to get a free ride all the time.
Turkey is a islamistic terror state and Trump should bomb them into oblivion together with Iran and why not the whole of the middle east and the far east too.

If your reading this your an idiot.

Oh my god. it's Robby! said:
I can have both, they were mean to him before and now with his whole insane support for a racist far right group they have better cause to be, but cmon, the press are mostly trolls too

No just the music media was unfair to him in the past but they were proven right and now the music and main stream media are unfair to him now but lots of people don’t see it that way I see a fair assement or him by the media, he’s a racist washed up singer, who’s lost touch with the world around him.
A

Uncleskinny said:
Unfair? For stating the fact that he is a racist? Tough shit buster, you started that one.
Click to expand...


no one cares if someone is racist anymore skinny. Your country is ruined by immigrants who would sell their mother for a quid.You are rearranging the deck chairs on the Titanic

I thought he was done doing interviews? "If you don't see the words come out of my mouth I never said it."

He should try doing some more television appearances with attached interviews. It would give those wonderful
things to his words, or any words in print really- context, body language, nuance. This is why humans are devolving into nasty little reactionary poo flingers, (and me as much as anybody else sometimes) we think we are communicating, and we often are, but we are also being misinterpreted, misunderstood, and bringing about drama and ambiguity that brings the whole of humanity down a notch or three.

"Touching from a distance, further over time."
V

Frik and Frak, back to back

Uncleskinny said:
Unfair? For stating the fact that he is a racist? Tough shit buster, you started that one.
Click to expand...

He started it...and you’ve been beating that one-tone drum at all hours of the day.

Please please please come to Po land Uncle Steve. I will even use my life savings money I was going to spend on a plane ticket to LA and buy a star map on Hollywood Blvd. and look for your house and sleep in the trashcans and camp out in front of The Sunset Marquis, Sunset Sound, and Hollywood Forever and pray you stop by to buy you and the band a Southwest ticket direct from LAX to Po Land. Please Please Please, let me get what I want.

Ketamine Sun said:
Don’t know what Uskinny is going on about, I mean, Morrissey has never stated anywhere that he was a racist. And a ‘fact’ on top of that ?

Well, name me some racists who have openly declared that they are racists.

Anonymous said:
Morrissey isn't a racist you dumb f***. Man, you remind me of a shit I took a few weeks ago. Smelly it was. Just like you. Ok, that was unfair. Maybe you don't smell. But you are a shit aren't you?
Click to expand...

hope skinnys next shit is a hedgehog.
its not me its you.

Gejo said:
How does he knows they'll translate his interview correctly and with no editing? I thought he said he wouldn't give more interviews after what happened with Spiegel.
Click to expand...

he meant one to one interviews,isnt all interviews now via email.
its not me its you.
H

gordyboy9 said:
he meant one to one interviews,isnt all interviews now via email.
Click to expand...

Hopefully that's so his manager or whoever can vet his answers first.
You must log in or register to reply here.

A
Morrissey interview in Esquire (Poland)
8 9 10