thought I’d show this wonderful piece of history off...

U.K. Vauxhall & I LP with 2 posters, one with a handwritten letter on the back from Morrissey, to “Alan”, presumably Alan Bennett, Morrisseys ex neighbour, friend and playwright, hence the references to ‘A Visit From Miss Prothero’ & ‘Intensive Care’, which were plays written by Alan, and adapted for television by the BBC in 1978 & 1982, respectively). Morrissey also makes mention of his album (Vauxhall) being the current U.K. #1 album, which acts a decent time stamp for when the letter was written, likely between 26th March ‘ - April 2nd, 1994.

(Poster measures 30 inches x 20 inches, making it one of the largest pieces of handwritten Morrissey text I’ve ever seen) 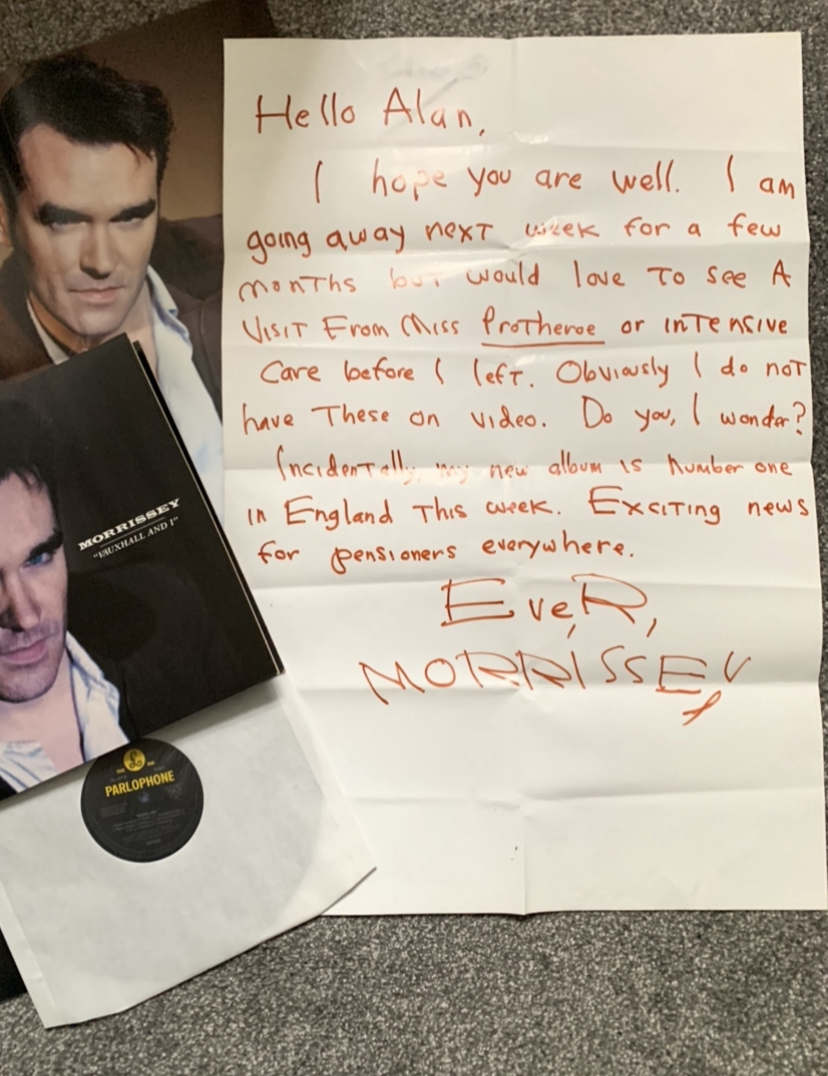 Was Morrissey fat as a child/teenager? Or did he just think he was fat?

In Julie Burchill/Tony Parsons' 1978 book, The Boy Looked At Johnny, there's a section where they denounce Reggae & the Rasta movement as black supremacist. So, I'm reckoning that's why Morrissey ended up saying similar things in that 80s interview that always gets dredged up. He almost definitely read it, because there's a lot about The New York Dolls in it.

My copy has lots of notes scribbled in the margin by an outraged hippie. It's fabulous.
A

Oh finally some evidence of their friendship and I met Alan in the Grey Horse Pub in 1999 which nowadays makes me feel ashamed cause of the fact I had no idea who he was. But I happened to have bought the Roy's Keen cd single and for some reason Alan was wondering what it was.

I now realise the funny man was taking the piss and pulling me leg by pretending to be surprised that his old friend and neighbour was actually a recording artist and famous. He looked at it and held the cover of it and started talking about a painting that Moz had given to him.

This was the day after the 1999 FA Cup final and United were 2 down and 1 to go later going on to win the Champions League so me and Alan chatted with some United fans who had just arrived by train from London and Wembley who had flags and things and one flag was the one Manchester Evening News had handed out for the final by having it placed for fans on their seat.

A charming reserved man but with a well hidden wit and he was never going to pretend that he knew Moz well but it was more on the level of just being friends with the neighbour and helping each other out now and then like we all do if we have neighbours.

Lovely to see evidence of the friendship they had looking after each other and other people. As for me I had never heard of Alan but I suppose the best meetings with the famous is when you're not a fan and end up spending time with them as if they are just anyone which they of course in a sense are.

He asked the singing barmaid if Moz's uncle had been in recently and she said they hadn't seen him in a few days but expected him to pop in any day.

The corner where we sat and I think we even had a chat about Sweden and othe things in general.
A

Nerak said:
Was Morrissey fat as a child/teenager? Or did he just think he was fat?
Click to expand...

Seems he was chubby up to age six, but as an older child and teen, he was very skinny.
A

Thanks for that and it really confirms the type of man I met back in 1999. He was completely uninterested in Moz as a pop star and apparently the same goes for other writers. That tells me he never destroyed his own unique "voice" by reading a lot.

A reserved and quietly spoken man and I would even say that it was like meeting a typical swedish male pensioner with the only difference he was speaking english. Maybe that is why we got on so well during the time we sat together having a few drinks.

He was especially thankful for a painting Moz gave him which he went on about even talking about where he decided to hang it. Moz wanted rid of it when he moved. I even think he mentioned that it was some kind of portrait.

I often wonder what he did up there in May 1999. What I remember from the pub itself is that the toilet was outdoors so when I went there when the weather wasn't the best and it was quite cold so a visit to the toilet was something you did in a hurry.

I realise now I've been to the pub not once but twice.

I still remember when he held the Roy's Keen cd cover and started talking about Morrissey as this old friend. At first I was thinking it was typical northern humour where someone is pulling your leg but then he got into some details about their time as neighbours.

I think Alan knows more than he lets you know but that his way of distancing himself from fame and things like that is just him being a gentleman. But he did seem genuinly surprised that Moz was so famous when I tried to describe him and his career and what kind of icon he is for so many people.

I'll never forget his eyes and humble personality. Weird that I once met him like that but before and after meeting him I never studied his career or his works so maybe it is about time I did? I bought the CD single and held it up when Roy Keane left training at The Cliff and he looked at it and me with a very angry face and I think he was swearing inside his Range Rover and then he drove off.

He had been told about that song and the lyrics no doubt about it. Maybe the other United players had played it in the changing room?

I can see Beckham dancing around to it.
A

Alan back in the day: I felt he was a bit frail when I met him but completely clear in his head.

He doesn't look at all friendly or like someone wanting to invite you to a conversation so when he did I was surprised. We shouldn't judge a person by their looks or a book by its cover I suppose.

Must be a man that chose to be self rather than alone and who values meeting and talking to people when he wants to and not the other way around.

I hate myself for not making him sign the roy's keen cd cover which was a very nice one and probably one of the better ones when it came to the whole product as such.
A

The Grey Horse Inn not far from the Britannia Hotel where me and dad stayed in February 1983 on my first visit there when Arndale was just about new and very modern for the time.

Small but cosy except for the toilets:

And by the way don't kill uncle!

Fascinating piece! I haven't read or watched those Alan plays, but I will get on it! (I am always being introduced to interesting things from Morrissey)... BUT why did he write "Before I left" instead of "Before I leave."? That doesn't seem like proper grammar to me, (but who am I kidding? I make grammatical mistakes ALL THE TIME!).
A

nobody's_nothing said:
Fascinating piece! I haven't read or watched those Alan plays, but I will get on it! (I am always being introduced to interesting things from Morrissey)... BUT why did he write "Before I left" instead of "Before I leave."? That doesn't seem like proper grammar to me, (but who am I kidding? I make grammatical mistakes ALL THE TIME!).
Click to expand...

You see that a lot in modern productions. It means that he looks back to something that has happened. Before I leave will suggest he is about to do it.

Think of American Beauty the movie and his last day in life, before it and after.
A

The Smiths at Arndale when it was brand new: I liked Alan's voice. It's the voice of someone who is genuinly interested respecting who he is talking to but it also has that quality of someone being a bit lost and still in search of answers. There is a witty undertone but never expressed bluntly.

I can only think of one man in Sweden who comes across a bit like him and that's Lars Lerin the painter and author. Lerin is way more feminine of course but a conversation with him and Alan must be a lot alike.

Famous when dead said:
"I thought, Put it this way, Mozzer, you have a card from Dirk Bogarde here (and he slapped the settee). You have Alan Bennett sitting in your kitchen having tea. You have David Bowie having sung one of your songs quite beautifully. What else are you looking for? What right do I have to be sour-faced and complaining, queuing up at Waitrose in Holloway being annoyed because somebody in front of me has got a leg of lamb? What more could there be?"
Click to expand...

I wish he still felt this humble.
A job half done isn’t done.

“So how did I end up so deeply involved in the very existence I planned on avoiding?”

So did Alan Bennet sell/give away this item to someone?

Beautiful. Thank you for sharing. I read a lot of Alan Bennet when I was on honeymoon in Egypt years ago.

Anonymous said:
I felt he was a bit frail when I met him but completely clear in his head.

He doesn't look at all friendly or like someone wanting to invite you to a conversation so when he did I was surprised. We shouldn't judge a person by their looks or a book by its cover I suppose.

Must be a man that chose to be self rather than alone and who values meeting and talking to people when he wants to and not the other way around.

I hate myself for not making him sign the roy's keen cd cover which was a very nice one and probably one of the better ones when it came to the whole product as such.
Click to expand...

Carlislebaz said:
I love untold stories... I was actually in a post office line this afternoon posting the last of the Xmas mail when a Spanish lady was in front of me with three parcels and was faffing about and taking an eternity to get done... I thought about Allan Bennett, and how he would have perceived , or written about this situation?... then I though, oh my god I’ve finally emerged into an old fart!!!!
Click to expand...

I love Untold Stories too. I think when you're northern, there's always a bit of Alan Bennett in you. My mother used to speak cattily about her sister's third husband, Dick. She didn't like him. But this was expressed (without a flicker of self-awareness) as, 'Oooh no, I don't care for Dick.' Pure Alan Bennett.

There's a bit in Untold Stories where he says he always replies to everyone who writes to him, so I thought I would put it to the test. He didn't disappoint - I got a postcard a few weeks later. It's one of my most treasured possessions.
Last edited: Dec 8, 2019
A

1) The handwriting is not convincing.
2) Bennett is a notorious hoarder and would never ever dispose of correspondence.
You must log in or register to reply here.