Subscriber
They have an Eighties section, with a Hatful Of Hollow retrospective (although no other Smiths albums, oddly), a Johnny Marr interview, a few nice pics - also, a review of Inside The Smiths, with a brief Mike Joyce Interview. Oh, and some badges, one of which is The Smiths. Pics below. 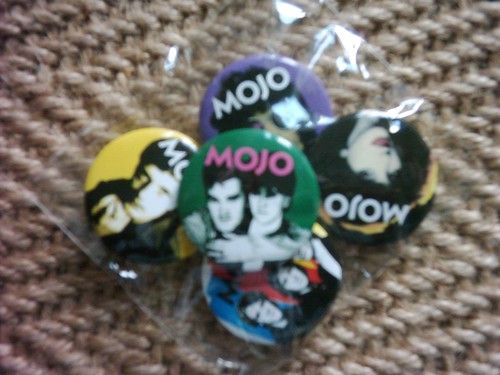 Moderator
Subscriber
Thank you very much Peter and littlecharmer who reported earlier:

Kewpie said:
Thank you very much Peter and littlecharmer who reported earlier:

Girlfriend In A Coma

Thank you m'dear
You don’t like me, but you love me
Either way you’re wrong
You’re gonna miss me when I’m gone

O-U-C-H.
I don’t look at the clouds of tomorrow through the sunshine of today.

on the flesh rampage

"he'd probably give me the V's and drive on"

what does giving the V's mean?
tonight i'll be your mother.
P

Kewpie said:
Thank you very much Peter and littlecharmer who reported earlier:

if i were uncle skinny reading your post, that would have , made me feel really deflated

vAndreav said:
"he'd probably give me the V's and drive on"

what does giving the V's mean?
Click to expand...

It's a hard-faced two word gesture, basically FU or up yers!

Attached is a piccy of Moz giving you the V's.

Do you ever notice how sometimes he gives the audience the V's when he sings, "I've heard you'll try/do anything/anyone twice" during Lemme Snog Ya. It's lost on most Americans.

I don't know why you would use two fingers when one would do perfectly well.

Caught that last line from Marr, too... youch.

Thanks for the scans! I appreciate it!

The insulting version of the gesture (with the palm inwards) is often compared to the offensive gesture known as "the finger". The "two-fingered salute", or "bowfinger", as it is also known, is commonly performed by flicking the V upwards from wrist or elbow. "The finger" is traceable to Roman times [6], but may be unrelated in origin, as the insulting V sign is largely restricted to the UK, Ireland, Australia and New Zealand.

The V sign, when the palm is facing toward the person giving the sign, has long been an insulting gesture in England and later in the rest of the United Kingdom. It is frequently used to signify defiance (particularly of authority), contempt or derision and is often accompanied with a verbal phrase like "f*ck off".

Gesturing in such a way is sometimes known as "Flipping the Vs" or "Flicking the Vs" in certain parts of the UK.[citation needed] This is most likely due to a popular method of delivery in which the gesture is made with the knuckles first facing towards the floor and then rapidly flipped up so that the outer knuckles are facing the target of the insult. In Scotland, this gesture is known commonly as the "Vicky".[9]

The insulting V sign can also be combined with the bent elbow, creating a compound gesture with the intensity and vulgarity of both components.

According to a popular myth the two-fingers salute and/or V sign derives from the gestures of longbowmen fighting in the English army at the Battle of Agincourt during the Hundred Years' War. The story claims that the French cut off two fingers on the right hand of captured archers and that the gesture was a sign of defiance by those who were not mutilated.
I don’t look at the clouds of tomorrow through the sunshine of today.

What issue of mojo is this? August? We are a month behind on Mojo here in Australia, i think....

Uncleskinny said:
They have an Eighties section, with a Hatful Of Hollow retrospective (although no other Smiths albums, oddly), a Johnny Marr interview, a few nice pics - also, a review of Inside The Smiths, with a brief Mike Joyce Interview. Oh, and some badges, one of which is The Smiths. Pics below.

Thanks for scanning the article. We won't get the magazine until the beginning of August here in SF.

I am less than nothing

Thanks for the heads up Uncleskinny and Littlecharmer.
"Before you go to sleep tonight, when you're in your jim-jams, remember, remember : Life is but a moment"

Look at Morrissey's face in the last scan!

How funny is this??

Thanks for the scans, Peter! You made my day!

So how can anybody say
They know how I feel?
The only one around here who is me
Is me
You must log in or register to reply here.

The Many Faces Of The Smiths - 3 CD, FLAC download