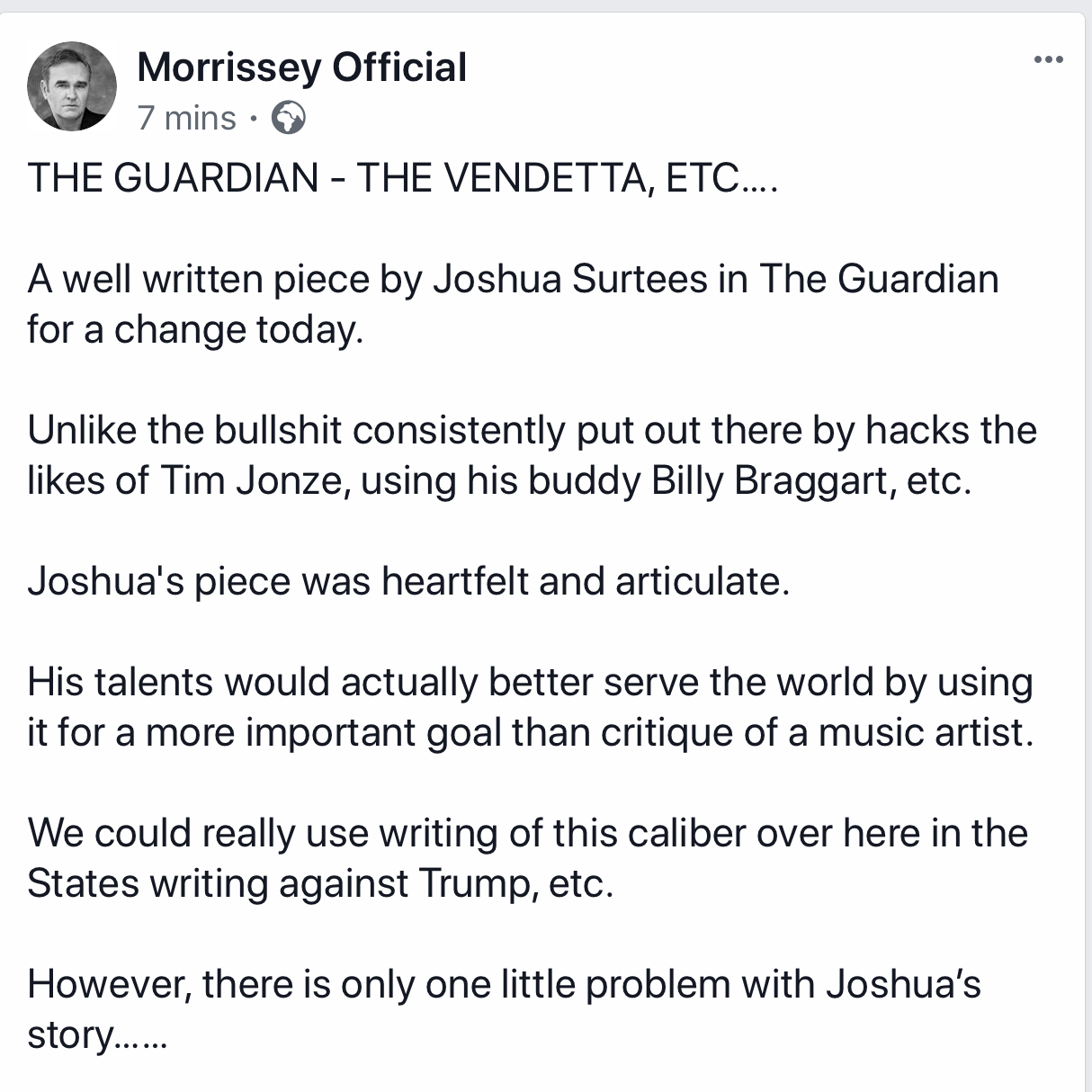 "THE GUARDIAN - THE VENDETTA, ETC….

A well written piece by Joshua Surtees in The Guardian for a change today.

Unlike the bullshit consistently put out there by hacks the likes of Tim Jonze, using his buddy Billy Braggart, etc.

Joshua's piece was heartfelt and articulate.

His talents would actually better serve the world by using it for a more important goal than critique of a music artist.

We could really use writing of this caliber over here in the States writing against Trump, etc.

However, there is only one little problem with Joshua’s story……

MORRISSEY IS NOT A RACIST!

You can say what you like about his provocative views.

But I’ve been with him as manager for over two years now.

When you travel together around the world, meeting all kinds of people, something like that would not go unnoticed.

Who’s right? Who is wrong?

Why don’t we find out together!!!

Joshua Surtees - If you read this…...I’m offering you a job!

We invite you to come out for the first week of our U.S. Tour in September.

Cover the tour for us, and come see for yourself.

Since M was such an important influence in your early life it should be worthwhile.

One thing…….you’d have to find a better paper than The Guardian to sell it to.

Since they have the absolute lowest circulation of all the major dailies in the UK.

And since the paper and their music editor have now become so well known for their personal vendettas against artists, etc.

the_kaz said:
Here is a translation of what I was referring to. It wasn't particularly critical, it was just pointing out the fact that what Morrissey just said sounded a lot like Trump's language:

'That sounds like Trump's "Fake News", but you just spoke out against Trump at a concert.'
Click to expand...

Oh, apologies.
I never read the print interview. Those choppy translations really test the strength of my patience...
That bit must've been chopped out of the audio file- God knows why.
R

How’s that working for you, slag?

Present day Morrissey fans - all 7500 of them - are a bunch of whiny, gutless lemmings.

Nah. I'm still a fan and I am a great guy. Morrissey is so funny. Its the people with this unusual concern, this deep wound caused by our Mozzer. Its his capacity to hurt you that is endlessly interesting. If you hate him it seems he is the only soul in universe. Still a fan. Prediction: the next album will be joyous. Pure joy. Maybe his best. I know these things.

BornFreeRightToLive said:
Oh, apologies.
I never read the print interview. Those choppy translations really test the strength of my patience...
That bit must've been chopped out of the audio file- God knows why.
Click to expand...

No worries. And, yeah, I think it was left out of the audio for some reason.

the_kaz said:
He doesn't have a clue, does he? I remember, during Der Spiegel interview, the interviewer mentioned that his language had become like that of Donald Trump, but Morrissey just brushed it off. I would respect Morrissey a lot more if he stuck to a consistent ideology, even if it was one that I disagree with. But his general cluelessness about politics is just embarrassing. Or maybe he just dislikes Trump because he doesn't just hate Muslims, but also Mexicans - Morrissey's preferred choice of immigrant.
Click to expand...

I think you gave the answer in your last sentence. When you think about it, Jesse is a fierce opponent of Trump and a representative of the Mexican community. I can't see Morrissey taking the opposite position and offending Jesse as well as his entire Mexican fan base. Another drawback of Trump is that he doesn't care about animal rights..

Interestingly, Morrissey also has fans in Turkey (istanbul} and Indonesia, both muslim countries. Turkey is certainly off-limit now for Western artistes, so I can see why Morrissey has issues with the more radical Islam.
S

"In contrast, fellow Smiths member Johnny Marr, who I interviewed a few years ago, appears to have retained his progressive values. That’s a relief for Smiths fans – and proof that, unlike his songwriting pal, we don’t all have to become more rightwing as we get older."

Awww. Milo Yiannopoulos's austerity stunt double stumbles and falls flat upon his face....yet again. Somehow, the world doesn't even bother to stifle a yawn and carries on. The normal thing to do.

Joshua's Fruit Shorties said:
Awww. Milo Yiannopoulos's austerity stunt double stumbles and falls flat upon his face....yet again. Somehow, the world doesn't even bother to stifle a yawn and carries on. The normal thing to do.
Click to expand... 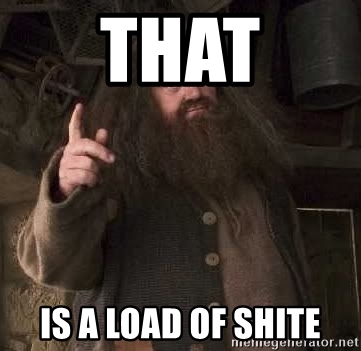 Pretty much every point Peter made here is valid and spot on, but it just seems a bit petty coming from official representation. It would have been better left unsaid.
J

Responding with a meme when you've no words for an adequate comeback is always a definitive sign that you've been triggered by a home truth. One you clearly can neither deny nor escape from. Ta for such a selfless demonstration of this.

"As a black teenager, I loved Morrissey. But heaven knows..." - Guardian article by Joshua Surtees
13 14 15