New Smiths Tribute in the works from American Laundromat Records

The Wedding Present, Greg Laswell, Doug Martsch (Built To Spill), William Fitzsimmons, Sara Lov, Trespassers William, Tanya Donelly, and others on board to cover The Smiths

Confirmed Artists (in alphabetical order) / Track Covering
Cinerama / London
Class Actress / Ask
Dala / Last Night I Dreamt That Somebody Loved Me
Doug Martsch (Built To Spill) / Reel Around the Fountain
Elk City / I Know It's Over
Greg Laswell / Half A Person
Joy Zipper / What Difference Does It Make?
Katy Goodman (Vivian Girls, La Sera) / track to be announced
Kitten / track to be announced
Mike Viola / How Soon Is Now?
Sara Lov / track to be announced
Sixpence None the Richer / I Won’t Share You
Tanya Donelly w/Dylan in the Movies / Shoplifters Of The World Unite
The Leisure Society / That Joke Isn't Funny Anymore
The Rest / Stop Me If You Think You've Heard This One Before
The Wedding Present / Hand In Glove
Trespassers William / There Is A Light That Never Goes Out
William Fitzsimmons / Please Please Please Let Me Get What I Want

Additional artists will be announced soon.

"I’m a huge Smiths fan and have been planning a tribute for a few years now. Timing just never seemed right. Then late last year, for several weeks, everywhere I went, I heard The Smiths playing… at the mall, at restaurants, on my car radio. It was weird… I felt like the universe was telling me now was the time. I started reaching-out to artists in November and the response was overwhelmingly positive. This is going to be one of the best tributes we’ve ever produced." – Joe Spadaro, American Laundromat Records

For the album cover, American Laundromat Records secured rights to use a Sandie Shaw photograph and tapped rock-poster designer Lonny Unitus (Apples In Stereo, The Decemberists, Willie Nelson) to design the cover art and eco-wallet packaging. Sandie Shaw (aka Sandra Goodrich) is an English Pop-Singer, who was one of the most successful British female singers of the 1960s. Both Morrissey and Johnny Marr of The Smiths were “two incurable Sandie Shaw fans” and reportedly wrote her a letter back in 1983 stating so. In April of 1984, Shaw recorded a version of The Smiths Hand in Glove (their first single) which peaked just inside the UK Top 30. She later collaborated with the band and has covered songs by both The Smiths and Morrissey.

“I wanted to do something interesting for the cover art. Most importantly, I wanted it to look like a Smiths album. Beyond that though, I thought the photograph we used needed to be something that had deeper meaning. Once I learned of the Sandie Shaw connection, I sourced hundreds of old photographs and finally found the one of Sandie lying in the leaves in that fantastic pea coat. I thought it was perfect immediately. Not only because the tribute will be an Autumn release, but because Sandie’s expression and the whole feel of the photo, in my opinion, is reminiscent of The Smiths music. It was a lucky find, and Ms. Shaw has been very gracious in allowing us to use it.” – Joe Spadaro, American Laundromat Records

American Laundromat Records is an independent record label based in Mystic, CT. It was founded in April 2004 as a hobby by music enthusiast Joe Spadaro with a small tax-refund check. The label is best known for the popular 2005 compilation High School Reunion - a tribute to those great 80's films which featured indie-rockers Matthew Sweet, Frank Black, Kristin Hersh, The Dresden Dolls and others covering beloved tunes from some of the 80's most popular teen films. All Music Guide called the tribute “One of the finest tributes ever amassed!” Other American Laundromat projects include the critically-acclaimed double-CD Cinnamon Girl - Women Artists Cover Neil Young for Charity, the award-winning children’s CD Sing Me To Sleep – Indie Lullabies, and the popular tributes: Dig For Fire - a tribute to the Pixies, and Just Like Heaven – a tribute to The Cure. In addition to tribute and charity-themed compilations, American Laundromat Records is home to original indie artists Julie Peel, The Caulfield Sisters, and Dylan in the Movies. Spadaro continues to be the one-man show running American Laundromat Records from his home in Mystic, Connecticut… and yes… still as a passionate hobby… he has a day job. Visit www.alr-music.com/index.php?content=aboutus for a complete history and discography.

ABOUT THE SMITHS
The Smiths were an English rock band, formed in Manchester in 1982. Based on the songwriting partnership of Morrissey (vocals) and Johnny Marr (guitar), the band also included Andy Rourke (bass) and Mike Joyce (drums). Critics have crowned them the most important alternative rock band to emerge from the British independent music scene of the 1980s. They released four studio albums and several compilations as well as numerous non-LP singles. Although they had limited commercial success outside the UK while they were still together, and never released a single that charted higher than number 10 in their home country, The Smiths won a growing following, and remain cult and commercial favorites. In their most prolific period, they created a political stir and provoked much controversy in promoting issues of the time – including anti-government, pro-vegetarianism and challenging dominant ideologies regarding lifestyle and sexuality. They were, and still are, admired for their revolutionary-views and uncompromising nature. The Smiths disbanded in 1987 amid disagreements between Morrissey and Marr. They have since turned down several offers to reunite. 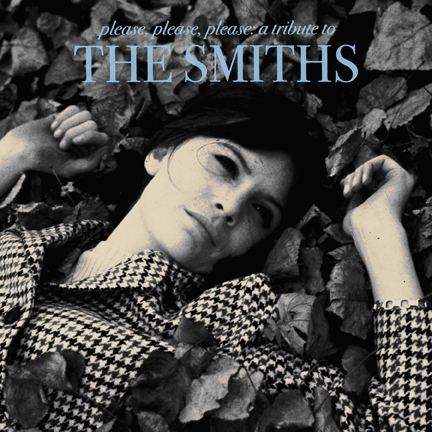 No offense to anyone but I can't think of a more pointless waste of time and money exercise than ANOTHER Smiths tribute record on foookin' 2011.

True, it is pointless. But isn't everything these days?
I know some people who would piss their slacks at the very idea of The Wedding Present doing 'Hand In Glove'. And 20 years ago, in England, it would have been earth-shattering news. Personally, I'm dripping with 'Meh...'
Yet the cover art is gorgeous ~ beautiful image, houndstooth peacoat among the English Autumn leaves, spot-on typeface and colour.
I'm seriously hovering over the 35 bucks bundle just for the AA XS T-shirt

"Morrissey is wearing a pair of vintage jeans and sipping from a can of Red Bull."

This sounds awesome! I hope it gets good promotion. But who is leading The Wedding Present these days?????
K

Sure why not? Also previewed at - http://www.clashmusic.com/news/the-smiths-tribute-album-due

Meanwhile, the Dum Dum Girls' cover of TIALTNGO is getting radio air-play.
A


sycophantic_slag said:
This sounds awesome! I hope it gets good promotion. But who is leading The Wedding Present these days?????
Click to expand...

actually, Cinerama's cover of "London" is great, very different but a great cover nonetheless. I don't know whether they are re-recording it or not but they already did that version for one of their b-sides which can be easily found anywhere.

as Morrissey can't do better than moaning not selling the albums,
and having a restperiod, going gigging and out

nothing on the The Smiths, no remastered Porter sessions, no live album in the early
years 1985 tour

so this is a treat, dunno all the bands and names, and sure there will be songs
by band, singer m/f will not be be that good

but yes I'll give it a buy, if it will be released out of the USA, hopefully Europe
or UK or wherever myu friendly musicshop lad can order 1 for me, and a few
others, as there were at least 10 remastered Bona Drag 2010 in my city in Eindhoven
[netherlands] sold in 2 musicshops

so another release, we're getting spoiled this year, its only begin march

My gosh, that is like the best photo of Sandie Shaw ever. Wonderful. Like Joe, I await the t-shirt design w/ my cash in hand.

OT: I was listening to the memoirs of Lynn Barber, veteran English journo who short story "An Education" was made into the popular film of the same name. She tells a funny story of interviewing Sandie Shaw and what a rude cow she was. Very surprising. Marianne Faithfull was a nightmare too, but you'd expect that.
[SIGPIC]http://forums.morrissey-solo.com/signaturepics/sigpic1460_3.gif[/SIGPIC]
A

oh my, the leisure society! i love them so much and i never knew they were fans of the smiths, but i guess most nowadays bands are.

nice cover picture
but has anyone heard of any of these bands ?
this Has to be the 3rd time this has been done
R

i love the cover picture, well, the smiths has pioneered that style of album cover artwork.

The Leisure Society are going to be on Marc Riley's show on BBC 6 Music tomorrow evening - around 6pm (?) - hope they're going to talk about the recording of their Smiths' cover!! I'd love to know why they chose That Joke Isn't Funny Anymore. I think they've chosen a really interesting mix of musicians to contribute to this tribute album. I am excited for the fall! Sixpence None The Richer have been too quiet of late. As has Tanya! But it's good to know they are still loving their music and recording when they can. The t-shirts look amazing
You must log in or register to reply here.

Godfathers Of Change Vol. 1 - A Tribute To The Smiths (M4A)