Rare Smiths soundboard cassette (University of London Union, 6 May '83) on FB for sale

Moderator
No stepping on the Facebook group's toes intended, but worthy of sharing. 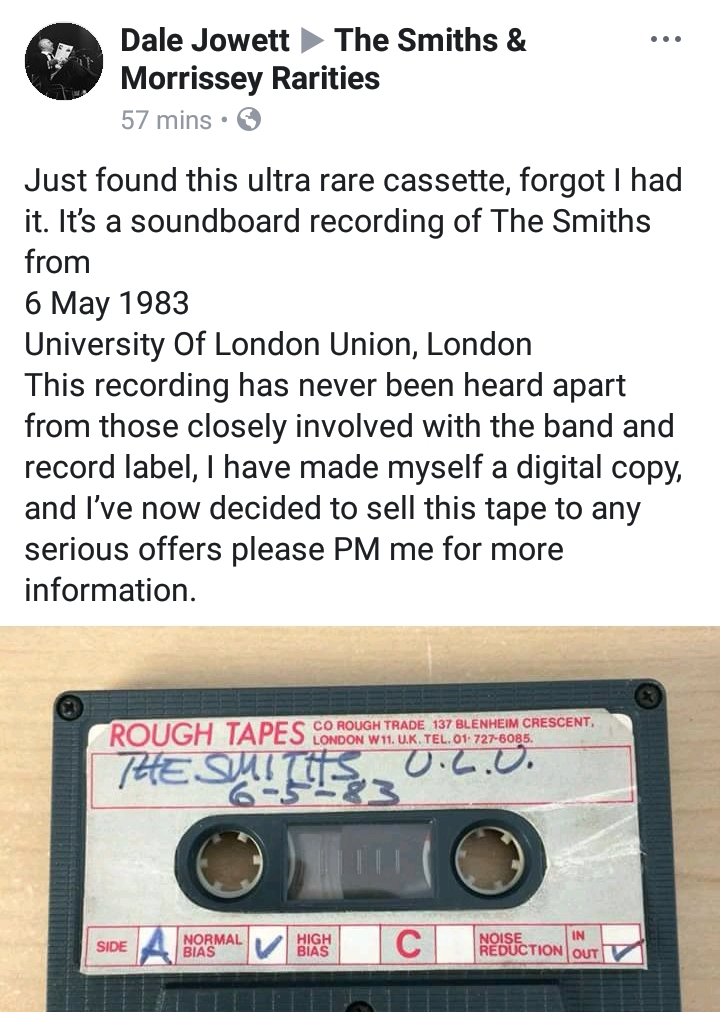 From Passions:
"The Smiths were billed between The Laughing Clowns and headliners The Sisters Of Mercy. They replaced previously booked band Babaluna. This gig is said to have earned them their first appearance on the John Peel BBC radio show. Rough Trade were about to release the band's first single, "Hand In Glove", and the label's plugger Scott Piering brought BBC produced and talent scout John Walters to see the Smiths. The latter was convinced and he invited the band to cut their first session two weeks later in London.

The exact setlist is unknown, but the opener was "You've Got Everything Now". "Miserable Lie", "The Hand That Rocks The Cradle", "Handsome Devil", "Reel Around The Fountain", "Hand In Glove" and possibly a few more were performed.

Dave McCullough from Sounds: "The very appearance of them must have blown nobody headliners Sisters Of Mercy off stage".

Bootlegs:
There are no recordings of this concert in circulation at this point in time.

I am always amazed when historic things appear after all these years.
Hopefully, the seller can provide a full set list for posterity.

Regards,
FWD.
Stealing things from the Internet - so you don't have to.

Famous when dead said:
Hopefully, the seller can provide a full set list for posterity.

Set list? How about unleashing the digital version of the show on the internet???
Let's just dance.

NealCassidy said:
What would be a 'serious offer' be?
Click to expand...

When it comes to strangers selling cassettes on the internet, I'd say a buck fiddy sounds fair.

Sal Kramer said:
Set list? How about unleashing the digital version of the show on the internet???
Click to expand...

Well indeed. f*** those holding stuff back after dangling it in your face. Arseholes.
V

WtF? I thought Skinny was done with Moz? Now he wants to have the tape unleashed to him?

Dont unleash it to the haters who will sell copies at the Mosque.

Deliver the tape to Moz who is the rightful owner.

Very positive story in Rolling Stone with Half A Person clip