(continued below do to length of text)

from: http://consequenceofsound.net/2010/03/16/check-out-under-great-white-northern-lights/
"If I knew where good songs came from I'd go there more often." Leonard Cohen
"I’ve always held the song in high regard because songs have got me through so many sinks of dishes..." Leonard Cohen


The final and ultimate scene that supported my sorrow for Meg was at the very end of the film. The last part of the movie is covering The White Stripes tenth anniversary show near the end of their tour. It is a triumphant gig for the band with shots of their first show ever, celebrating backstage before the show, and a final dance between Jack and Meg on stage after the show. The pain comes in the next scene, the final scene, where Jack and Meg are sitting in a studio in one of many scenes of the two of them in a small room while Jack plays music. The difference is in this particular scene Jack is playing “White Moon” off of their newest album Icky Thump on a piano, and as the scene goes on you notice Meg crying. It keeps going for a few more minutes of Jack playing and Meg sitting on the piano bench next to him crying. Not just a few tears either. She is on the verge of a full fledge sob session. Jack finishes the song, looks over to her, gives her a hug, releases, she keeps crying, he hugs her again this time tightly with a kiss on her head. She continues to cry in his arms and then suddenly the title card pops up and the credits role.
That’s it. The scene over. No explanation. No words from either of them just the song and Meg crying her eyes out. It could be that it was just a particularly moving rendition of the song and she really enjoyed it. Could be, but with the rest of the movie behind it, it is a sad scene that sort of tells me this: She still loves him. I don’t want to play counselor or psychiatrist, but with Jack running the show for the last 10 years it makes me wonder. Who initiated the divorce? Jack got remarried, but what has Meg been doing? The White Stripes is all she has while Jack is off playing in other bands, producing albums for Loretta Lynn, and possibly collaborating with Jay-Z. What has Meg been doing? It just makes me feel incredibly sorry for her. Look at it with this in mind, shortly after this Canadian tour the band canceled their US tour due to Meg White’s “acute anxiety” and her inability to travel for the tour. Is that just a spokesperson’s spin? Or Meg’s spin? They did eventually tour after that, but was that scene of her crying a last straw for her? One from which she needed to recover? She did recover, but the band has yet to tour again. She also got married last year…in Jack White’s backyard in Nashville.
None of this takes away from the enjoyment of the movie. Not at all. It is a fantastic documentary and concert film, and I definitely recommend it. However, just be prepared to think about things. Go into it with these thoughts that I’ve laid out in your head, and let me know if you see it too. Go watch it, and comment back on here to let me know if you noticed the same thing. I’m always ready to be told I’ve read too much into it. Maybe it’s just because I secretly love Meg. Call me, Meg.

from: http://consequenceofsound.net/2010/03/16/check-out-under-great-white-northern-lights/
"If I knew where good songs came from I'd go there more often." Leonard Cohen
"I’ve always held the song in high regard because songs have got me through so many sinks of dishes..." Leonard Cohen

Beautiful film and I cried too.

I hope they can come back cos I miss my Stripes.
I am not in love, but I'm open to persuasion.

My boxed set arrived today! The shipping carton is marked # 22 of 1750. It's beautifully packaged and designed. The booklet is illustrated with a Wizard of Oz motif (much to my Oz-lovin' daughter's delight): 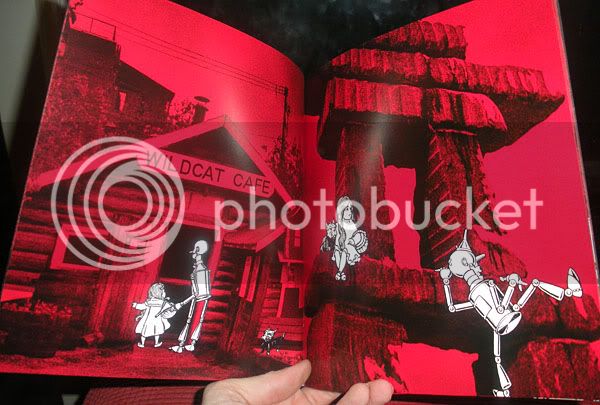 The set includes 2 large vinyls and this red vinyl 7": A poster propped up above the photo book: Litho and a page from the book: And now I'm going to watch the DVD.
With very high expectations!
S

Lovely, mines arrived on Monday. It is quite an outstanding package. My 7" is on white vinyl and it has a different sleeve and I got the Meg/Jack on a boat print. I'm sure you will love the dvd, I haven't watched the live concert dvd yet, saving that for the weekend.

I am not in love, but I'm open to persuasion.

I'm gonna watch the full concert this weekend, too

OK, so I went into this DVD knowing the ending, so I was determined not to cry.

During the first half I thought - why is everyone raving about this? It's excellent footage, beautifully filmed, etc. But what is it that has sent so many reviewers into such a frenzy?

But it's very subtle, and as the film unravels the emotional undercurrent becomes more powerful and by the end I, too, was a blubbering mess.

Most of us are familiar with the emotional story behind the band - everyone knows they aren't brother and sister even though they continue with the facade. What this film brilliantly shows is what has never been said (publicly) between the two of them - and I imagine they weren't even aware that this side of their relationship was being captured.

The REAL star of the film is Meg. Her silence. Her depression. And in the end - on the night of their 10th anniversary as a band - they open presents, they cut the cake, they do the waltz. "Really, nothing has changed" says the interviewer. But the silent glance they exchange in response says it all. I've read that the final piano serenade by Jack was impromptu. But even if it wasn't, it's still one of the most raw, truly emotional scenes ever captured on film.

It's all the sadness and joy of two people who will always share a special, almost mystical, musical bond. Sooo beautiful!!!!

"Oh and he still claims, despite concrete evidence otherwise, that he and Meg are brother and sister. I mean…come on. We have seen your marriage license."

He knows that we know. I've always taken him to mean they're spiritual siblings.

I dunno about that reviewer, seems highly presumptuous - not to mention offensive - to imply that Meg's marriage to Patti Smith's boy is somehow second-best for her, not her heart's desire. Maybe he (the reviewer) is letting his Meg-lust blind him. He wouldn't be the first - she's a heartthrob to many a man.


“Is it possible for a brother and sister to dress in only red, white and black, play blues music with no computers or samples, travel across the Arctic to places other bands would be scared to venture, play free shows everyday at random locations, and not be the biggest thing since The Beatles?” asks Jack White.

Since the duo’s first Detroit gig at an open-mike night back in 1997 and across six studio albums, the White Stripes — singer-guitarist Jack and his drummer and ex-wife Meg White (they now weirdly describe themselves as siblings) — have dutifully abided by Jack’s Rules of Threes. All clothes, gear, instruments and accoutrements are limited to three colors: red, black and white. Songs have just three sounds: guitar, drums and vocals. Roadies wear three-piece suits. It all feels a bit O-C-D.

Tuesday’s “Under Great White Northern Lights,” the duo’s first release since 2007’s “Icky Thump,” conforms to the code, too. It’s even issued in three different formats: audio (CDs and a double LP), video (concert and documentary DVDs) and print (a 208-page book, plus a silk-screened photo).

It’s issued by Warner Bros. and Third Man, Jack’s Nashville-based boutique label that specializes in handmade vinyl. (And, yes, it derives its name from the number 3).

“It’s us having a plethora of film and music at our table that we decided to put in a curry and bake it at 300 degrees,” Jack, 34, tells The Post. “There are dessert treats in there, too, for those fans that hate their vegetables. All kinds of exclusive vinyl and artwork. This isn’t some Internet mirage, either — you can hold these things in your hands just like Grandpa did.”

Audiowise, it’s the band’s first-ever live release, documenting a tour through every province and territory in Canada, including: a five-pin bowling alley in Saskatoon; a 40-foot fishing boat called the “Annandale Light” off of Charlottetown, Prince Edward Island; and a rec-center acoustic jam in Nunnavut with Inuit elders, who fed Jack raw caribou.

“The strange locations made for the most intriguing and inspiring moments for us,” Jack says. “You tend to play songs in a bowling alley that you wouldn’t at home with mother in the parlor.”

“I like the show that was only one note,” he says, referring to a ridiculously brief, albeit free show in St. John, New Brunswick. “The crowd got their money’s worth on that one.”

The concert footage captures unhinged performances of songs that span the band’s career, demonstrating why Meg’s minimalist percussion and Jack’s colicky blues guitar have earned the Stripes respect from critics and rock titans alike. Jack jammed with Jimmy Page and U2’s The Edge in the film “It Might Get Loud” and shared a stage with the Rolling Stones in Martin Scorsese’s “Shine a Light.” The duo has won three Grammys and sold more than 12 million records.

The box set is also a multimedia monument to the bond between a former husband and wife whose music outlasted their romance.

The Canada tour did, however, end in cancellations and the painfully shy Meg suffering from acute anxiety. In the rare moments when she whispers, viewers need subtitles to understand what she’s muttering. By the end, the cracks in her psyche are showing. Following their 10th anniversary concert in Nova Scotia, Meg sits next to Jack at a piano while he plays “White Moon.” Tears stream down her face.

“Her femininity and extreme minimalism are too much to take for some metal heads and reverse-contrarian hipsters,” Jack says. “She can do what those with ‘technical prowess’ can’t. She inspires people to bash on pots and pans. For that, they repay her with gossip and judgment. In the end she’s laughing all the way to the Prada handbag store. She wins every time.”
You must log in or register to reply here.

B
Was grunge the last great rock movement?

F
The Smiths collection for sale