Hand In Glove / That's How People Grow Up / Ganglord / Speedway / I Have Forgiven Jesus / World Peace Is None Of Your Business / I'm Throwing My Arms Around Paris / Yes, I Am Blind / The Bullfighter Dies / Life Is A Pigsty / Everyday Is Like Sunday / Earth Is The Loneliest Planet / Trouble Loves Me / Meat Is Murder / First Of The Gang To Die / The Youngest Was The Most Loved / I Know It's Gonna Happen Someday / The National Front Disco // Asleep / One Day Goodbye Will Be Farewell 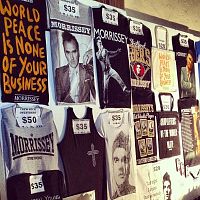 A few of the backdrops used: Did anyone try to hug / get on stage like the 2nd or 3rd song into the show or was it just the mad frenzy at the end ? Is "Earth is the lonelist Planet " a fast song ?

Thanks for the information Compadre .
A

Ryan. said:
I wonder if a line from a Smiths song was done in the middle of Speedway?
Click to expand...

No, he did not sing a line from a Smiths song during the middle of Speedway. There was a long pause, and it seemed as if he was going to, but didn't. I will post the video on YouTube soon.
A

dodgers1970 said:
That setlist is accurate. Here are a quick few points. I'll be honest in my observations, so please don't shoot the messenger:

He was less chatty than usual.
Fans responded explosively to HAND IN GLOVE, but "World Peace Is None of Your Business" got an icy reception and people headed for the urinals. Not because they didn't know it, but it appeared no one liked it.
The Bullfighter Dies seemed like a short teaser as it was under 2:00 and I liked it a lot.
Meat is Murder was accompanied by its usual companion video that had those who'd had In N' Out Burger pre-show riddled with guilt.
Earth Is the Loneliest Planet was excellent.

The clear lowlight (SORRY) was WORLD PEACE IS NONE OF YOUR BUSINESS.
The Highlights were:

The band and Moz sounded fantastic...especially on Ganglord.

Speedway was great, but we've all seen it now.

Crowd was more subdued than they should have been for an opening night of a tour! That was disappointing.
As he began "One Day Goodbye Will Be Farewell", fans rushed the stage for a hug or kiss. Before you knew it, the fans overpowered and manhandled the security and Boz and Jesse seemed to drop their guitars to rescue Morrissey and escort him offstage. Lights came on, exit music played.

No SMITHS snippets played within Speedway.

"We have a new CD and LP. The Follow up to Viva Hate..." as someone pointed out.

Someone will photograph the merch I am sure. All the same shirts as last time. 7 new ones. Same print on canvas as before, but this time it was unsigned for just $30 and a cool white coffee cup with "World Peace Is None of Your Business"... any other questions? Just ask.

Ryan. said:
From !Viva Hate! -
He also invited a fan onstage to introduce the band.
Click to expand...

Well, that was just a joke (although he may have had us going for a minute there

To have a follow-up to "Viva Hate" is splendid news. The gig sounds fantastic. Reading between the lines I would say that we could be
witnessing Morrissey's last year of touring.

You're the one for me

Oh dear - a 6/10 for the setlist. It's hugely depressing that he's reintroduced one of the contenders for his worst ever single (That's how people grow up), and other more recent duff stuff (Youngest most loved). Utterly sick of Meat is Murder (musically, it was never even that good in the first place) and National Front Disco just leaves a nasty taste in the mouth after his idiotic comments about immigration. Ganglord has a decent tune but ruined by a clumsy lyric. Great to hear Asleep, Trouble, and I Know It's Going to Happen though, and let's hope those new ones are at least half decent.

Guernie said:
Hey Dodger did the crowd just part like the red sea when Boz and Jessia helped Moz off ?
Click to expand...

It seemed like a lot of people up front were reluctant to accept that it was really over.
[SIGPIC][/SIGPIC]

World Peace Is None Of Your Business

http://www.youtube.com/watch?v=PDsF-6-b0dg
What then is salvation? I believe that salvation is the process through which one suddenly is able to bear that this life is meaninglees, empty, cold and indifferent - in itself a nothingness.

dodgers1970 said:
"World Peace Is None of Your Business" got an icy reception and people headed for the urinals. Not because they didn't know it, but it appeared no one liked it.
Click to expand...

I remember it having a pretty part somewhere near the middle or so. The shortness of Bullfighter was a surprise; it did work well.
[SIGPIC][/SIGPIC]
A

Thanks Emil. The music sounds ok but the lyrics sound pretty awful.
Lots of clumsy schoolboy social comment about not voting, and governments being out to get you.
Oh dear!

We are all we Need

Like it!
IF YOU CANNOT STAND THIS FAKE WORLD, TAKE MY HAND

Thanks! After one listen, I like it... now I'll wait for the studio version to land.


dodgers1970 said:
"World Peace Is None of Your Business" got an icy reception and people headed for the urinals. Not because they didn't know it, but it appeared no one liked it.
Click to expand...

I'm old enough to remember the same thing happening to Jack The Ripper...

Thanks very much! After reading of the icey reception I was kinda expecting the worst. But I actually like it! Beautiful vocal melody!

Moderator
http://www.slicingupeyeballs.com/2014/05/08/morrissey-san-jose-cut-short-video/
The end of the gig footage and show regurgitated information from here.
Solo referenced - the clips appear fubar'd but might just be me.
A few clips.
Regards,
FWD
Last edited: May 8, 2014
De gustibus non est disputandum.

Earth is the loneliest planet
https://www.youtube.com/watch?v=O2jHl2LTFYg

Famous when dead said:
Instantly liked this - thank you.
Sounds just like the demo
Cheers,
FWD
Click to expand...

"World Peace" is nothing more than a turd. The lyrics and music sound like they were written by a child. And not a very gifted child, I might add. "Bullfighter" is standard Morrissey filler and "Earth" reminds me of the Macarena. And not in a good way.

If these songs are the "gems" he has created over the last couple of years, then his carreer is truly over.
You must log in or register to reply here.