Sing Your Life: Morrissey at the National Stadium, 1991.

This is a good read! 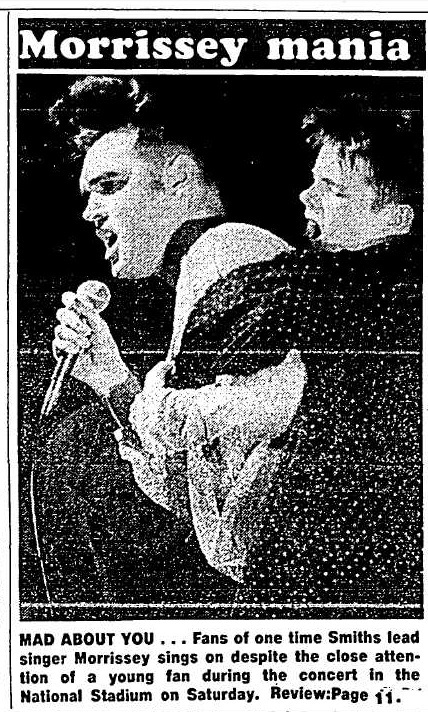 "Morrissey’s father phoned the Gerry Ryan Show once in its early days to complain about the lack of airplay given to his son’s music on Irish radio." -Dermot Hayes writing in the Irish Press.

Friday sees the release of Morrissey’s new record, Low in High School. Its cover features a child holding an axe outside Buckingham Palace, clinging to a placard that says ‘Axe The Monarchy’. One would expect nothing less.

His solo career has now produced a remarkable eleven albums, beginning with 1988’s Viva Hate. If you care, my favourite remains You Are The Quarry. Next February, Morrissey returns to Dublin to play the Point Depot, a venue we will never call by any other name. He is strongly bound to Dublin through blood, but also a passion for Irish literature, which included reference to Brendan Behan on his last recorded album.

It’s an interesting part of the Morrissey story that his first proper solo concert was here in Dublin, with a sold-out concert at the National Stadium in April 1991. There had been a gig in December 1988 in Wolverhampton, but it was in many ways the remnants of The Smiths, and largely consisted of Smiths songs. Dublin was the beginning of the first ever Morrissey solo tour, backed by a new band and performing only his own songs.

A negative review in the Evening Herald inspired full pages of letters from disgruntled fans over subsequent days, but for most who were there the concert was nothing short of a revelation, with tickets selling out in an impressive forty-seven minutes (before the internet). The Irish Press couldn’t quite get the appeal, asking just what was it about “the bard of bedsit psychoses” that appealed to Irish teenagers. It was all front page news the following day, viewed as nothing less than the latest youth culture craze in the eyes of curious journalists.

The constant stage invasions at the National Stadium were one feature of the concert that fascinated journalists, with the Press commenting on how “Daffodils, lupins and geraniums showered down on the Mancunian legend throughout his exciting one hour set.”

Over in the Herald, the review could have been about Bill Hailey and the Comets or The Beatles, both of whom had caused their own scenes on Dublin stages decades earlier:

To say Morrissey is idolised by his fans is an under-statement. They could not be kept off stage – although at times it looked as though even the narcissistic Morrissey was getting fed up with being kissed repeatedly on the ear.

Dressed in jeans and a glittering lurex style v-necked vest, Morrissey, to the delight of a packed arena, spent much of the evening wrapping his arms around his own body, running his hands through his hair and letting his tongue shoot back and forward lizard-style.

The youth of the crowd was commented on in many places, NME joking that “the only way they could have bought Meat Is Murder is by being wheeled into the store in a pram.”

One great account of the gig comes from David Bret’s Morrissey: Scandal and Passion. The concert had a large Garda presence, who had done their research into the fandom surrounding the artist, and Bret writes “his opening number, ‘Interesting Drug’, was virtually inaudible on account of the fans excitement. One of these grabbed the microphone from him to yell ‘I love you Steven!; Morrissey grabbed it back and growled ‘Thank You, but I don’t know who Steven is!'” 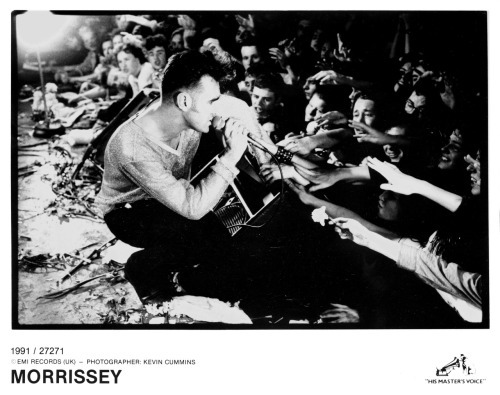 After a few days, the Herald had to guillotine Morrissey related letters, as fans had taken such offence to their review of the gig. Woody from Dublin 5 insisted that “there is a light that never goes out. His name is Morrisssey”, while David in Dublin 12 agreed that the concert hadn’t been great, maintaining “this has more to do with an ancient boxing hall unfit for a talent contest, never mind a big concert, than anything else.”

The set list included no Smiths numbers (it was far too early for that), but there was a cover of the New York Dolls song ‘Trash’, dedicated to the great Johnny Thunders who had died shortly before the concert. Despite what the Herald maintained, it seemed to everyone else that the man who would later describe himself as “ten parts Crumlin, and ten parts Old Trafford” was off to a flying start. A few months later he returned to the much larger Point Depot, his boxing stadium days behind him in Dublin for a while at least.

faroutmagazine.co.uk - Morrissey makes US TV debut on an infamous episode of The Tonight Show in 1991