The 80's Are Back (Sorta Kinda Moz Relevant)

The Artist Formally Known As "Mud"

By SIMON REYNOLDS
nd now, the 80's.
It was probably inevitable. The pop music and fashion industries depend on recycling their own history, and the retro styles of the 1960's and 70's had been strip-mined to the point of exhaustion. Anyway, pop cult revivals tend to arrive punctually after roughly 20 years â€” just long enough for a period to acquire the charm of remoteness. In the 80's themselves, rock groups like R.E.M. and Jesus and Mary Chain harked back to the Velvet Underground and the Byrds of the 60's. So, in the 00's, the 80's have returned, right on time.
Dance clubs devoted to 80's pop culture have been springing up from Chicago to London, from Berlin to Brooklyn, all of them echoing with the thumping sound of 80's synth-pop groups like Human League and Soft Cell. But the D.J.'s are not just spinning records culled from the bargain bins. They're also playing music by a raft of contemporary 80's-influenced groups like Fischerspooner, the Faint and Miss Kittin and the Hacker.
The clubgoers, too, are participating in the recycling. At nightspots like Berliniamsburg in the Williamsburg section of Brooklyn, they're adopting new wave fashion, with its asymmetrical haircuts, skinny ties worn over T-shirts, and studded belts and bracelets and they're doing so in a spirit that curiously mingles irony with admiration.

Hiroyuki Ito for The New York Times
BACK TO THE 80'S Clubgoers at Berliniamsburg, a Brooklyn nightspot in the vanguard of a revival of 80's music.

Two tendencies coalesce in revivals like this. In one, people who were young during the period being celebrated reach middle age and experience pangs for the styles of their youth. In the other, a new generation becomes fascinated by the pop culture that prevailed when that generation was in its infancy. So the 80's revival is driven in part by pure nostalgia and also by the more intriguing notion of nostalgia for something never lived through.
For the people fueling the trend, the artifice of 80's pop culture seems refreshing at a time when the "keep it real" ethos of hip-hop and nu metal bands like Linkin Park and P.O.D. dominates the mainstream.
Larry Tee, who founded Berliniamsburg and is its resident D.J., said of the revival, "It's happening now because all the formats of popular music are so abused that people are revolting."
The revival is not confined to music. Is it any wonder that "That 70's Show" of the late 90's has begotten "That 80's Show" in 2002? The sitcom's retro reference points are played strictly for self-mocking laughs â€” a sort of "weren't we ludicrous back then?" kind of humor: yuppies with mobile phones the size of bricks. In the fashion world, young designers are rediscovering the early renegade work of Vivienne Westwood, whose collection drew inspiration from pirates, peasants and American Indians.
But music is where the decade is being mined most enthusiastically, and that's no surprise. Music is almost invariably the prism for nostalgia. Even in "That 80's Show," one of the main characters works in a record store. And Michael Winterbottom's forthcoming film, "24-Hour Party People," is set in the milieu surrounding the Manchester record label Factory and its punk-rock bands Joy Division and Happy Mondays. Another coming film, "Cherish," and last year's "Donnie Darko," which for no apparent reason was set in 1988, feature soundtracks laden with 80's songs.
This suggests that the glossy pop from the early days of MTV is gradually displacing 60's Motown and 70's disco from their privileged places in popular memory, as a post-boomer generation makes its presence felt culturally. Indeed, "We Are the 80's," a show on VH1 Classic regularly features videoes by groups like Berlin and Men Without Hats. Stations like KXPK (96.5 FM) in Denver and KVMX (MIX 107.5) in Portland, Ore., have pioneered radio formats that target fans of 80's new wave music.
Nothing captures and communicates a sense of period better than the clothes and pop music associated with it. Other art forms, meanwhile, don't seem to succumb to these bouts of nostalgia. It's hard to imagine a sudden wave of films in the style of 80's youth movies like "The Breakfast Club" and "Pretty in Pink," or an emerging school of novelists trying to imitate Jay McInerney and Brett Easton Ellis.
In pop music there are three distinct 80's revivals going on. The dominant one â€” known variously as electro or nu-wave â€” harks back to the plastic 80's of synthesizers and robotic voices. Then there is the 80's of glammed-up "hair metal," as resurrected by performers like Andrew W. K., whose MTV favorite "Party Hard" pays homage to the rabble-rousing anthems of Twisted Sister and MÃ¶tley CrÃ¼e. Finally there's the mid-80's wave of 60's-influenced noise-pop from groups like Jesus and Mary Chain, as revived by bands like Black Rebel Motorcycle Club.

This last microtrend â€” effectively a re-revival â€” highlights one of the ironies of the 80's resurgence, for the 80's were the first era in pop in which recycling and retrospection became rife. There were vogues for ska, rockabilly, psychedelia and other musical antecedents.

"With 1980's retro, we have reached the point of second-order recycling," said Andrew Ross, a cultural critic who is the director of the American studies program at New York University. "It's the equivalent, God forbid, of double quotation marks."
What most people find alluring about the 80's, though, is its spirit of futurism. Groups like Adult and Fischerspooner look back to the early 80's, when synthesizers, sequencers and drum machines transformed the sound of both mainstream pop and underground dance music. The aesthetic can be summed up by the oxymoronic term "retro-futurist."
Modern digital technology is so sophisticated that producers make electronic music that sounds almost as if it were played by a live band, full of subtle rhythmic irregularities that create a humanlike feel and jazzy swing. But just as punk rockers embraced a raw, elemental music, rejecting the overproduced sound of 70's rock, today's electro groups use old-fashioned synthesizers and drum machines. They prefer cold tones and stiff beats because they evoke a period when electronic music seemed alien and forbiddingly novel. They are making machine-music and proud of it. 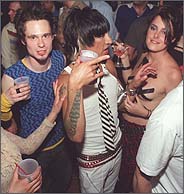