The new compilation is available from today on CD in the UK (Vinyl - Aug. 31), and I can see it’s already on Spotify too. 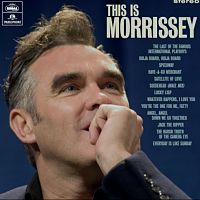 Moz hatters. A CS Lewis reference. As in, he drinks tea and talks crazy.
A

Anonymous said:
Moz hatters. A CS Lewis reference. As in, he drinks tea and talks crazy.
Click to expand...

I'll be buying it and burning it.
"It's not your bidet anymore."
U Pathetic loser. You need to move on if you don't care about him anymore. What is the point of stupid tweets like this and your pathetic postings. Get a grip and be a man.
Check out @RealSociableDad’s Tweet:
Pathetic loser, someone really felt the need to tweet this? no one gives a shit what "realsocialdad" thinks. When have been become so weak?

Anonymous said:
There are two key differences between Morrissey and Depeche Mode. Depeche Mode pack stadiums all over the world and don’t mind taking the piss, even when it’s directed at themselves. Morrissey can’t sell out a stadium anywhere except the 3rd world - where they don’t speak his native tongue - and he has about as much humour as a whiny little bitch toddler, in a candy aisle who’s been shut down by mommy.

Check the stats for gross-touring revenue for both. Its not even fair to compare one of the most highly successful touring bands on the globe to a whingy, weak-kneed hack shit-sack like Steve-O.
Click to expand...

if you want your singer to die and be brought back to life through heroin abuse then dave gahans your man,me I will stick with clean living Morrissey.
hail hail.

Anonymous said:
Nah. There won’t be a single, aurally or cognitively sound individual on the planet that buys this rubbish. He’s pandering to the lowest common denominator with this garbage. He’s pissed away a lifetime of fans and now has to scrape the bottom of the human barrel to keep himself in cashmere and cheese. It’s working though! Loads of wee-young dimwitted millenial twats out there that are yearning for meaning in their worthless lives - and daft enough to shell out for tickets, transport and hotels. ...not to mention the merch-table gouge they suck up, right before the show is cancelled.

Morrissey and his present crop of slack-jawed, mom’s basement-dwelling f***-tard rubes are perfectly suited to each other.

Where it comes to separating the weak-headed from their wallets, he’s a f***ing genius.
Click to expand...

if you say so,your wasting your time on here coz nobody is listening.
hail hail.
A

A fan of the old MP3 purchase, eh?

It's only selling for 4 pounds?
"Harassing fellow forum goers since 1997"
H

DavidK said:
It's only selling for 4 pounds?
Click to expand...

Anonymous said:
Although it's also not Sony BMG, I think. Just BMG.
Click to expand...

Yes it is just BMG but it is the BMG connected to Sony isn't it?

BMG Rights Management GmbH is an international music company focused on the management of music publishing, recording rights and music distribution. The company operates as a division of the international media conglomerate Bertelsmann.

I'm just interested to know why Morrissey has been signed to 15 different record labels since he has been a solo artist. If you look back to my previous message I have the list in full.

There are only three major record labels left in the world they are Universal Music Group (which I think is the biggest), Sony and Warner Bros. The rest of the labels that you have heard of are now all connected to those three labels they have many subsidiary labels!

Morrissey was with Harvest (which is part of the Universal Music Group) just before being signed to BMG. I know that Morrissey had trouble with Harvest.

I just hope that BMG are looking after Morrissey well. I hope that they have his best interests at heart that sort of thing. After all it is a music industry or music business it is as much about business as it is about the music. Sometimes artists who are not good at business or not that aware can suffer.

Morrissey was with RCA at one point. Elvis Presley was on RCA (Victor) for most of his career after he left Sun records. RCA is now currently owned by Sony.

Malcolm Tucker said:
The new compilation is available from today on CD in the UK (Vinyl - Aug. 31), and I can see it’s already on Spotify too.

like it because it's different throughout. won't listen to it in my lonely hotel rooms in berlin and kopenhagen though

I was being facetious. I should've added the rolling eyes.
"It's not your bidet anymore."

marred said:
I was being facetious. I should've added the rolling eyes.
Click to expand...

Had me going, I thought it really was all over.
I'm stubborn,selfish, and to old.....
A

I hope this album has 'Everyday Is Like Sunday' on it. That's the ultimate Moz rarity that I've been trying to track down for years. Haven't heard it yet, but apparently it's a cracker of a song!

Anonymous said:
I hope this album has 'Everyday Is Like Sunday' on it. That's the ultimate Moz rarity that I've been trying to track down for years. Haven't heard it yet, but apparently it's a cracker of a song!
Click to expand...

The Sun and The Air is the one I'm after.
You must log in or register to reply here.

Tags
this is morrissey info