a year of music, a year of change & Bliadhna mhath ur! 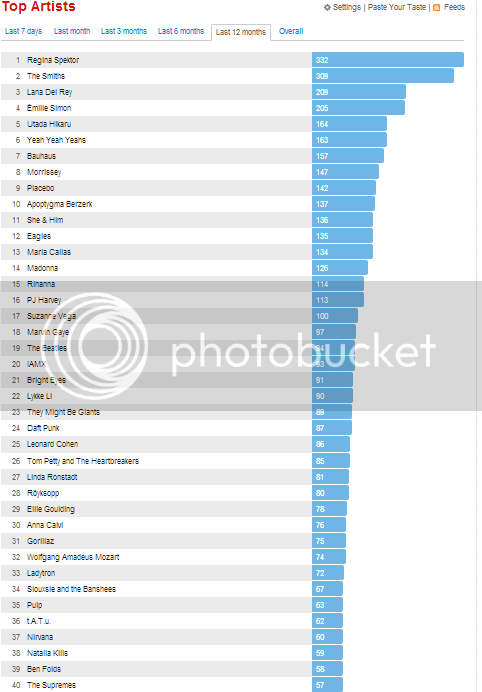 music: Here's Where the Story Ends by The Sundays
mood: on my 1st drink, gonna take it slow, I got big plans tonite

Regina S. tops the year, no surpise there, I play her almost every day.
As for much of the rest of the top of the list, I can tell its becuase of my "goto" playlists
they vary from 30 to 100 songs and are as follows:
when online playlist: mainly Moz, Smiths, Hikki, She & Him plus a few others
drinking playlist: mainly Yeah Yeah Yeahs, Eagles, Bauhaus, & bunch of others with a few songs
study/reading/working playlist: mainly Émilie Simon, Placebo & Apoptygma Berzerk
when I have company

its mainly Lana Del Rey, Rihanna, Marvin Gaye, but others too, its my most varied list, the one the most thought has gone into. It has what I call my "hard 8" of bands, so the others are: Madonna, PJ Harvey, IAMX, Leonard Cohen & Bright Eyes
now let's look at my 2013 "top 40": 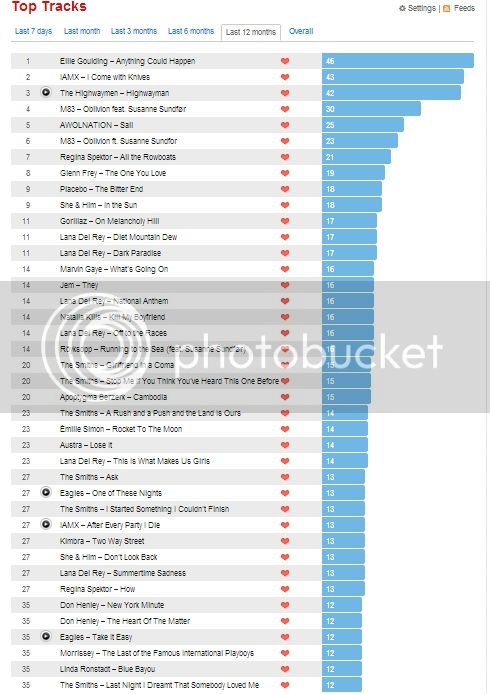 Interesting, even though Regina S. is my #1 artist, only 2 of her song made the top 40
I think this is because when I play her songs, its usually 10 or more at a time
As for the top song, I wake up to it many a weekend morning, no surprise.
And "I Come With Knives" & "Highwayman" speak to my soul, all be it different parts of it.

As to the song "Oblivion", by far my fave song of the year, the 2 versions I have of it would make it the top of this list were they added together. The movie is not so great, but Susanne S.'s voice in this song, just, well, I love it, OK?

My year:
When 2013 started I had no job, was less than 3 years clean, and had no idea what the future held. Even though I had come back from a year abroad and as I saw it, turned my life around.
However, almost no one I knew from my life "before" reached out to me, it was a bit depressing, but I got over it and moved on.
China has been a "3rd life" 1 before her, 2 her & after, 3 this new life, in which I have a good job, some friends, and one where I often share the company of a beautiful woman

which I have no business being anywhere near
too much?
I hope not, the truth is, I want "more"
may the gods not strike me down, just following my soul which still desires to keep a wanderin...
Share:
Facebook Twitter Email Share Link

There are no comments to display.