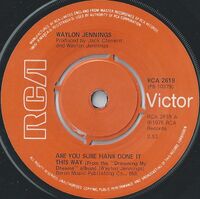 Lord it's the same old tune, fiddle and guitar
Where do we take it from here?
Rhinestone suits and new shiny cars
It's been the same way for years
We need to change

Ten years on the road, making one night stand
Speeding my young life away
Tell me one more time just so I'll understand
Are you sure Hank done it this way?
Did old Hank really do it this way?

US Catalogue No. PB 10379 Both tracks taken from the [url=http://www.discogs.com/Waylon-Jennings-Dreaming-My-Dreams/release/1707551] "Dreaming My Dreams Album"[/url] 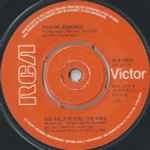 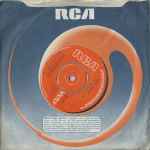 "Are You Sure Hank Done It This Way" is a song written and performed by American country music artist Waylon Jennings. It was released in August 1975 as the first single from the album Dreaming My Dreams. The song was Waylon Jennings' fourth number one on the country chart as a solo artist. The single stayed at number one for one week and spent a total of sixteen weeks on the country chart.The B-side to "Are You Sure ..." was "Bob Wills is Still the King", a tribute to the music of Wills. Although it never charted on its own, "Bob Wills ... " gained airplay and continues to be a staple at classic country radio stations.