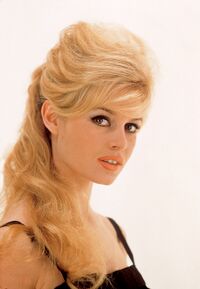 Several of her songs have been used as pre-show tracks.
In 2004, she was amongst the potential artists for the Meltdown Festival curated by Morrissey.
From I-D magazine, May, 2004:

"There are whispers of this MELTDOWN line-up you've been assembling.

Well, yes, I have the last three living members of The New York Dolls together for the first time, doing a set of songs from 1973-74. Which is, of course, a phenomenal piece of history for people like me. And I have the group Sparks doing a set from 1974 too, which is the year I first found them. Then there's Nancy Sinatra , Jane Birkin, Sacha Distel, hopefully Brigitte Bardot, and hopefully Francois Hardy too... I have Alan Bennett doing what he does. Hopefully Maya Angelou, who has almost said yes. Then there’s The Libertines , The Ordinary Boys, and my close friend Linder, playing solo and not with Ludus for the first time ever. It will all be very interesting. If only to me."

French actress, recording artist and activist born September 28, 1934 in Paris, France. Most of her recording career results from collaborations, most notably with Serge Gainsbourg, Jean-Max Rivière and Gérard Bourgeois. No longer an active actress, she now devotes most of her time to her role as a leading animal rights activist.

Brigitte Anne-Marie Bardot ( (listen) brizh-EET bar-DOH; French: [bʁiʒit baʁdo] (listen); born 28 September 1934), often referred to by her initials B.B., is a former French actress, singer and model. Famous for portraying sexually emancipated characters with hedonistic lifestyles, she was one of the best known sex symbols of the 1950s and 1960s. Although she withdrew from the entertainment industry in 1973, she remains a major popular culture icon.Born and raised in Paris, Bardot was an aspiring ballerina in her early life. She started her acting career in 1952. She achieved international recognition in 1957 for her role in And God Created Woman (1956), and also caught the attention of French intellectuals. She was the subject of Simone de Beauvoir's 1959 essay The Lolita Syndrome, which described her as a "locomotive of women's history" and built upon existentialist themes to declare her the first and most liberated woman of post-war France. She won a 1961 David di Donatello Best Foreign Actress Award for her work in The Truth. Bardot later starred in Jean-Luc Godard's film Le Mépris (1963). For her role in Louis Malle's film Viva Maria! (1965) she was nominated for the BAFTA Award for Best Foreign Actress. Bardot retired from the entertainment industry in 1973. She had acted in 47 films, performed in several musicals, and recorded more than 60 songs. She was awarded the Legion of Honour in 1985. After retiring, she became an animal rights activist and created the Fondation Brigitte Bardot. Bardot is known for her strong personality, outspokenness, and speeches on animal defence; she has been fined twice for public insults. She has also been a controversial political figure, having been fined five times for inciting racial hatred when she criticised immigration and Islam in France. She is married to Bernard d'Ormale, a former adviser to Jean-Marie Le Pen, a French far-right politician. Bardot is a member of the Global 500 Roll of Honour of the United Nations Environment Programme and has received awards from UNESCO and PETA. Los Angeles Times Magazine ranked her second on the "50 Most Beautiful Women In Film".