The I'm Throwing My Arms Around Paris CD1 liner had an image of the band holding Herb Alpert records. 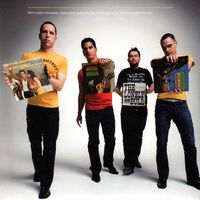 The cover of Herb's "South Of The Border" album appears to have inspired Years Of Refusal's cover text:

In 2018, Jake Walters shared an alternative cover photo proposed for Years Of Refusal.
It featured Morrissey with a trumpet posing like Herb Alpert.
Further, Walters stated it was Herb Alpert's actual jacket Morrissey is wearing. 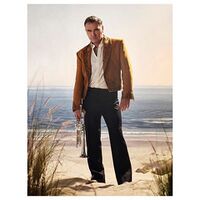 Herb Alpert (born March 31, 1935) is an American trumpeter who led the band Herb Alpert & the Tijuana Brass in the 1960s. During the same decade, he co-founded A&M Records with Jerry Moss. Alpert has recorded 28 albums that have landed on the Billboard 200 chart, five of which became No. 1 albums; he has had 14 platinum albums and 15 gold albums. Alpert is the only musician to hit No. 1 on the U.S. Billboard Hot 100 as both a vocalist ("This Guy's in Love with You", 1968) and an instrumentalist ("Rise", 1979). Alpert has reportedly sold 72 million records worldwide. He has received many accolades, including a Tony Award, and eight Grammy Awards, as well as the Grammy Lifetime Achievement Award. In 2006, he was inducted into the Rock and Roll Hall of Fame. Alpert was awarded the National Medal of Arts by Barack Obama in 2013.