The image that would later become Meat Is Murder's cover was that of Marine Cpl. Michael Wynn. See his bio & service recollections here. 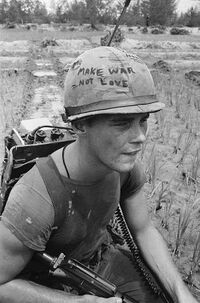 His image would also be used in 2018 as a backdrop:

In the Year of the Pig is an American documentary film directed by Emile de Antonio about American involvement in the Vietnam War. It was released in 1968 while the U.S. was in the middle of its military engagement, and was politically controversial. One year later, the film was nominated for the Academy Award for Best Documentary Feature. In 1990, Jonathan Rosenbaum characterized the film as "the first and best of the major documentaries about Vietnam".