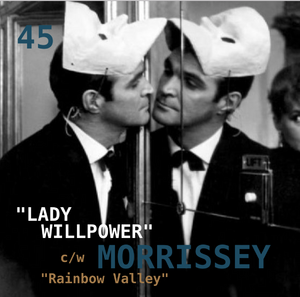 This was going to be a cover of the Love Affair song from their 1968 album: "The Everlasting Love Affair".

"The first single is "Bobby, Don't You Think They Know?", which features vocals by Thelma Houston. The B-side is "Rainbow Valley", a cover of the UK hit by The Love Affair."

This, again, never materialised.
It has remained unreleased since.

The original lyrics are reproduced below and it remains unknown if Morrissey recorded the song without making any lyrical changes.

I'm heading home again,
'cause it still seems I don't fit in.
And the world ain't all
I thought that it would be.
From this hill I'm looking down,
upon that friendly town.
There's a place I know
that's paradise to me.