"Back On The Chain Gang" sleeve posted on Rough Trade

Now showing on (both including sleeve as already seen): 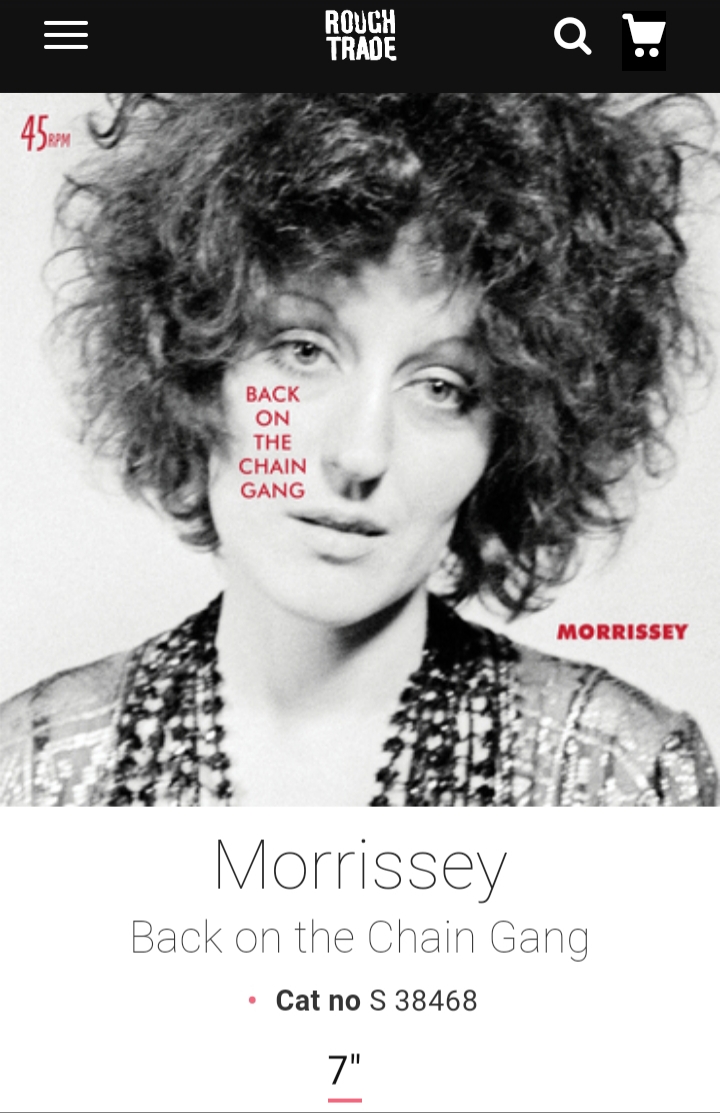 Site blurb:
"Morrissey's Back on the Chain Gang. Available here on 7".
As the lead singer of the Smiths, arguably the most important indie band in Britain during the '80s, Morrissey's theatrical crooning and literate, poetic lyrics -- filled with romantic angst, social alienation, and cutting wit -- connected powerfully with a legion of similarly sensitive, disaffected youth. These fans turned the Smiths into stars in Britain, exerting tremendous pull over much of the country's guitar-based music for many years after their breakup, and even if the group remained underground cult artists in the States, they had a fan base that slowly, steadily grew larger over the years." 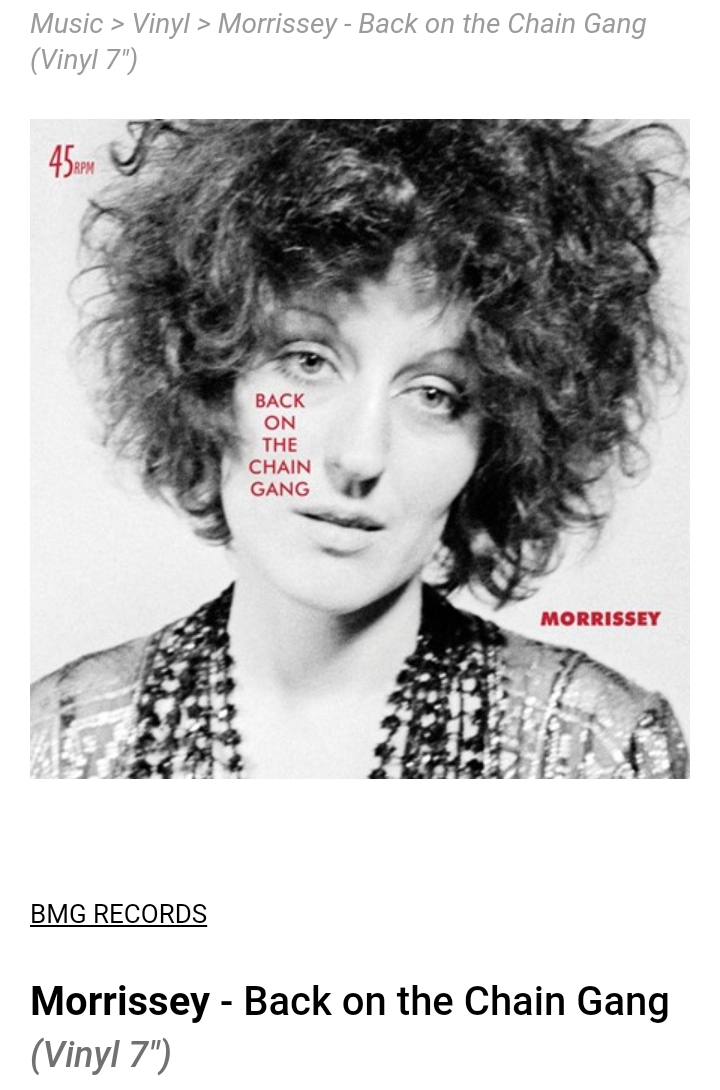 Site blurb:
"Morrissey presents a 7-inch single release of his cover of "Back On The Chain Gang," originally written by Chrissie Hynde and released by The Pretenders in 1982. It was recorded at Sunset Sound in Los Angeles, CA with Joe Chiccarelli, who produced Moz's last two albums World Peace Is None of Your Business and Low in High School, and features backing by Jesse Tobias (guitars), Solomon Walker (bass), Matthew Walker (drums) and Roger Manning (keyboards). It's joined here by a live version of "I Didn't Know What to Do" on the B-side."

$9.99 via Music Direct (US).
https://www.musicdirect.com/vinyl/Morrissey-Back-on-the-Chain-Gang-(Vinyl-7) 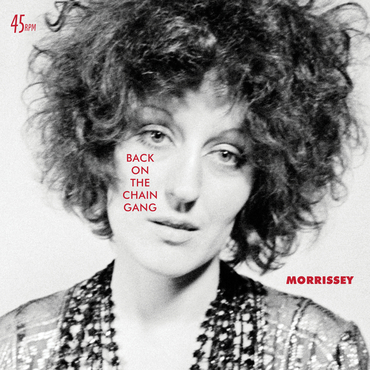 Peppermint said:
One of my favourite ever Ted clips, along with 'Small... far away'.
Is this true? I thought the traditional line-up were lined up as usual on the upcoming covers album?
Click to expand...

There are so many great Ted moments.

I read here (so it must be true) that rather than poor ticket sales the issue was that there was a difference of opinion and a couple of them just walked off the tour. I don’t know if it’s true, but it doesn’t sound too far fetched.

I do know that the last time I looked just before the cancellation my local venue had sixteen tickets available of three thousand. Of course the other two thousand nine hundred and eight-four could all have been on Viagogo, but sold is sold.

I expect we will find out shortly when the next tour kicks off. I suppose we could take it in turns to stake out that record shop in Camden to see if Boz is there instead of rehearsing.

Can you do the first month, Peppermint? I’m busy... errrr... thinking of excuses not to go.
"All you people ought to be like me / Drink that good cold whisky and let the cocaine be."

From the left said:
Next single. please

One of his best for years. I just wish there was an apostrophe in there somewhere.
"All you people ought to be like me / Drink that good cold whisky and let the cocaine be."

play one and seal the others so I can sell for hundreds of pounds in a year or two.

If you have smarts you are well advised to do the same.
Click to expand...

Yes,but shipping is expensive to europe,so i'll wait to buy on another place.

Peppermint said:
Aww, doesn't Sam get a credit for the sleeve artwork?
Click to expand...

Oh, come now. As criticisms go, it's a lot more restrained than that artwork deserves. There is an art to laying out typography, which is what you pay graphic designers for (or most people do). There is no getting away from it, that looks like it was cobbled together in Microsoft Word. It's particularly depressing because Morrissey's sleeves, going right back to the Smiths, were traditionally little works of art in their own right. Everything Sam has touched (and I have no idea if he's done that sleeve, but it does look suspiciously like it), from the toe-curling KMAL video to various photoshopped promo efforts, have simply not come close. He lacks the talent and originality of his uncle. This is disappointing. Am I not allowed to say when something is disappointing?
M

From the left said:
Next single. please

You'd want to buy a song that has already been available for free for months?

Johnny Barleycorn said:
One of his best for years. I just wish there was an apostrophe in there somewhere.
Click to expand...

I know, it's bringing out the grammar Nazi in me.

I like the layout and image on the sleeve.
Clueless disciple
E

Chairman Of The Bored

Oh, just piss off with your second rate cover versions.

$9.99 lol.
Man hands on misery to man.
It deepens like a coastal shelf.
Get out as early as you can,
And don't have any kids yourself

mcrickson said:
You'd want to buy a song that has already been available for free for months?
Click to expand...

Yes,in format vinyl or cd single for add to my collection.

Blikey mate! I knew that was Boz at Tommy's chomping on a bacon double cheeseburger, extra extra large chili cheese fries, and an extra large root beer when Uncle Steve was down at Sunset Sound!
A

Released only on vinyl...great!! Can't wait for the flacs at morrissey-solo Mozz!
E

We have really reached the end of the line, haven’t we?

What’s next? A duet with Paul Potts?

It's a great cover, even if she weren't who she is.

Turkerator
Really likin' what Moz did with the live side of this song.
The studio move should be a real whopper popper.
6

I'm so glad Morrissey is covering Chrissie Hynde. These are two musical artists who were there from the start of the UK punk scene, and both of them love animals. And both have been releasing records for decades. SING YOUR LIFE
6

The Pretenders' cover of "Everyday is like Sunday" was one of the best covers of Morrissey.

Yes, they are certainly kindred spirits musically. Nice to pay back the honour.

Peppermint said:
I know, and there doesn't seem to be a complete live version out there - I can only find two and they're both (weirdly) stuffed in the middle of Speedway, and incomplete.
Click to expand...

I noticed that pep,the versions hes done have been short.
its not me its you.
You must log in or register to reply here.

Morrissey A-Z: "Back on the Chain Gang"
2

Tags
back on the chain gang single