Details posted by Famous when dead:

Morrissey’s New Record.
“I’m here in Los Angeles doing some recording,” he told CaliforniaRocker.com in the VIP tent at the event. “I wouldn’t miss this.”

Morrissey was kind to the fans, posing for pictures and then jamming along in the audience with McKagan, Armstrong, Armisen and Jonesy on stage. All credit to Donna Balancia.

(more photos in article and comments) 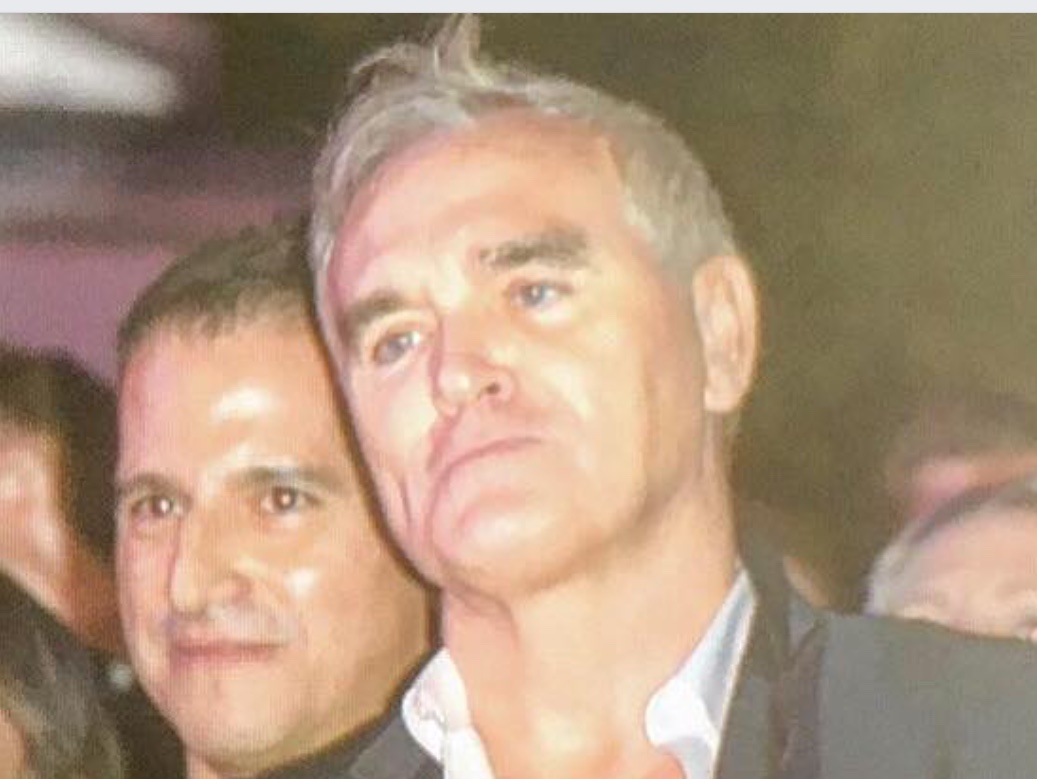 Peppermint said:
Second pic in FWD's last post. Where he's outside and pointing to the badges on his jacket. His eyes are definitely smiling. His mouth is just catching up, that's all.
Click to expand...

pepper I thought he was pointing to the guy behind him.
its not me its you.

gordyboy9 said:
pepper I thought he was pointing to the guy behind him.
Click to expand...

I must admit, I did at first, but FWD's caption says it's the badges. Since there's another photo of him with that guy I guess it could be either.

I don't have time for stupidity

This reminds me that I need a new RAMONES t-shirt!! Glad to know he's recording!

Peppermint said:
I must admit, I did at first, but FWD's caption says it's the badges. Since there's another photo of him with that guy I guess it could be either.
Click to expand...

Just repeating what CaliforniaRocker had tagged the picture with (and visibly so here to counter the Waters assertion).
Regards,
FWD.
Some of us is turning nasty
A

Surface said:
Can see Clem Burke talking to Morrissey in one of the pictures.
Click to expand... 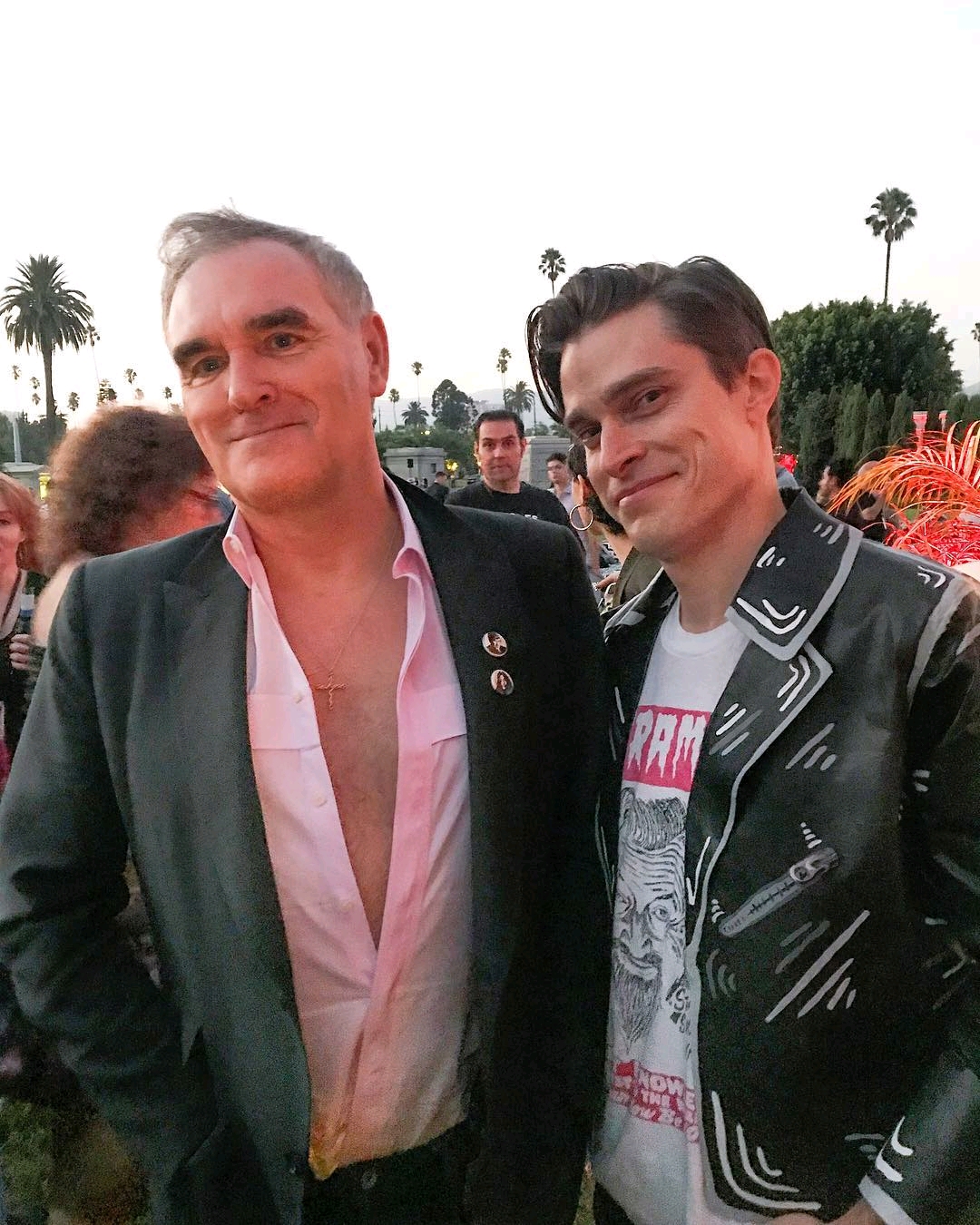 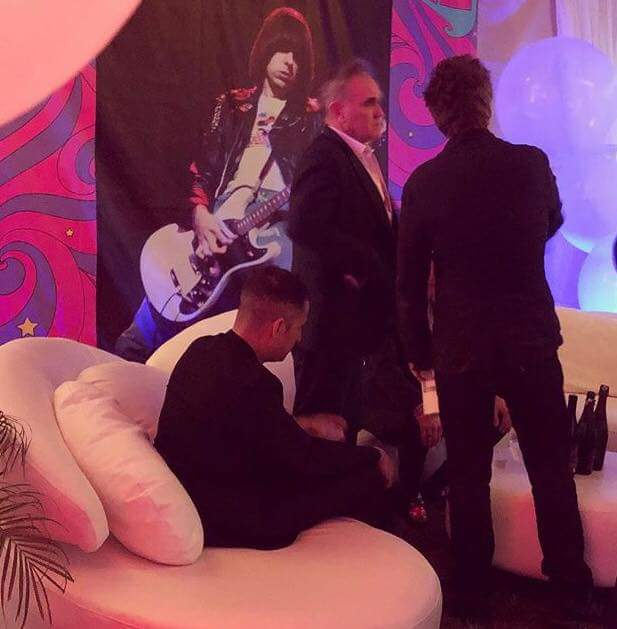 Regards,
FWD.
Some of us is turning nasty
A

Anonymous said:
Please....do your shirt up!
Click to expand...

Please....leave your shirt undone!
A

If you cropped that photo so it was just Moz and Jesse it would be a dead cert for Viz's Up The Arse Corner.

One can only hope.
"It's not your bidet anymore."

Since when has Damon the right to sit ?
V

Anonymous said:
Since when has Damon the right to sit ?
Click to expand...

How come forum favorite and local hero the ONE the ONLY DRAMAJ
never is invited to these wonderful affairs? You never see the Lawnmowers being invited-promoters
probably know they would have to pay to fly them over and once here nobody would know who they
are-but regardless, outside of the odd cricket tournament you dont see them at all, they are never
invited to the posh affairs. Poor DramaJ and his former sidekicks.

Surface said:
Can see Clem Burke talking to Morrissey in one of the pictures.
Click to expand...

Is that the back of Clem's head in the one that looks like a faulty mirror?
A

More instagram/twitter bits.
(CaliforniaRocker cropped the pics themselves on IG, the full ones haven't surfaced yet).
All credit to those publicly sharing.
Regards,
FWD.
Click to expand...

The guy at the top is a friend of Jesse's. He calls himself Danny Lethal and he runs a lame ass gallery down town, has stuff by serial killers and mental bands. A real schmuck.

I'm surprised mozzer let him near him, he's a real sleeze.
He pretended Moz would be at a NY Dolls night this year and pretended Johnny Marr was gonna DJ after his LA gig.
Rose who's IG is attached hangs with Danny and also lied about johnny.

Her and Jesse are f*** buddies

I see KYs ex left a bitchy comment about the 'tacky taco gig' and then deleted it. He's still mouthing. Weirdo.
I'm not surprised Rose knows him. She the Moz.

The other people there were mainly friends of Jesse and Danny.
Mozzer is in a good mood and said there will be some f*** off awesome news soon.

Madame Tussauds next and the wax copy is already touring as for the others present they need to take more zinc to reduce their oily skin.
F

URBANUS said:
Morrissey is a weird man making great music and writing amazing lyrics but his own taste in music is absolutely shite and I guess it is a generational thing cause when he was young the shit that was released left him with no choice but to listen to it.
It is a total mystery how none of his personal favourites are any good and are in fact part of the darkest chapter in musical history. His taste in music and fashion is just something he should completely retire from and leave that to others to tell him what to to wear and what to listen to cause the man is clueless.
Click to expand...

what a maroon you are. I mean totally clueless. Beyond redemption. I think you meant "the GREATEST chapter in musical history". Go back to the Coldplay website or something.
A

don't throw the dinner out with the dishwater
You must log in or register to reply here.