Images from an anonymous person (UPDATE Aug. 28 - these images are excerpts from the technical rider, not the full rider): 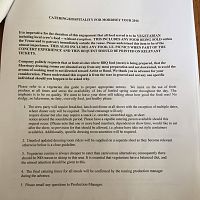 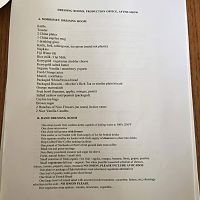 Tweet from @DickieFelton on Aug. 20, 2016. Link posted by Loretta Swit in the comments: Member of the Month™

Watch out for the downwind.

I'm sure sorrow will rain down on this thread any second for that reason but it states on the second page in big letters that they are a veggie tour and not a vegan one. Eggs and cheese welcome. I thought it kinda funny about the hygiene standards being strict and that they can not be overstated. Don't know if they're germaphobes or if it's common for people to just be grungy
B

I did hear that when Moz played the Sydney Opera House he would shower standing on towels.

Cheesus Christ, Wait til Benny gets a load of this...
T

"Not just one person's requirements. We're all prissy high maintenance arseholes."
"All you people ought to be like me / Drink that good cold whisky and let the cocaine be."
A

Nobody with a brain or a conscience needs to waste any more time debating this.

Morrissey is a delusional Crank-Fraud, a ludicrous hypocrite who lectures his audience for eating Meat whilst eating Cheese, which causes more suffering. There is no point in drinking plant milk whilst eating Kerrygold cheese, it is absolutely incoherent ethically.

I will return to this after a good night's sleep but will note here that this is an apocalyptically depressing denouement to his career as a charlatan Crank-Fraud.

Edit: The font on the front page is similar to the YOR era so if this is 4real it's just more evidence that Morrissey was bullshitting about animal liberation for not just years of refusal to embrace veganism but decades of refusal..One can only hope this is fake, for Morrissey's sake.

While preaching a vegan diet it doesn't look too flash having cheese and butter on your personal rider in 2016. He does leave himself open when shit like this leaks, especially as he does not seem fully informed of the horrors that occur in the dairy industry.
'The operation went well.....................but the patient died.'

IF this is true, I suspect someone's job is on a tighrope.
M

That was my first impression. Besides, the source is not cited, which usually doesn't happen when the owner of the site post something.
Anyway, nothing makes me think Morrissey knew about the content of these papers.
Last edited: Aug 28, 2016

Yes you are
"It's not your bidet anymore."

Stupid and a new low by the likes of David T and the serial masturbater, UnkSkinny.
A

Oh jeez, let the man have some cheese.
I don't care. He never said people should not eat cheese and there are dairy farms who ARE animal friendly. Find out for yourselves. By the way, I found out there is some delicious biological cheese available in my town completely made out of plants and containing no substances from animals whatsoever.

The moral Philistines that creep up here are boring.
Always trying to impose their self-righteous rules on other people. I don't care if Moz does the same.
I don't have to follow him. I make my own decisions.

Morality is is easy and cheap, especially if you don't have to follow your own rules.
You can say anything on a website and who is going to confront you with your shopping list?
Gerrit

No way this is recent, there is no way he would order milk. And since when is Corona white trash?
You must log in or register to reply here.

TTY: Morrissey in Norway (Stavanger and Bergen in August 2016)
2

TTY: THERE IS A LIGHT THAT NOW GOES OUT - final six rescheduled US dates cancelled
10 11 12