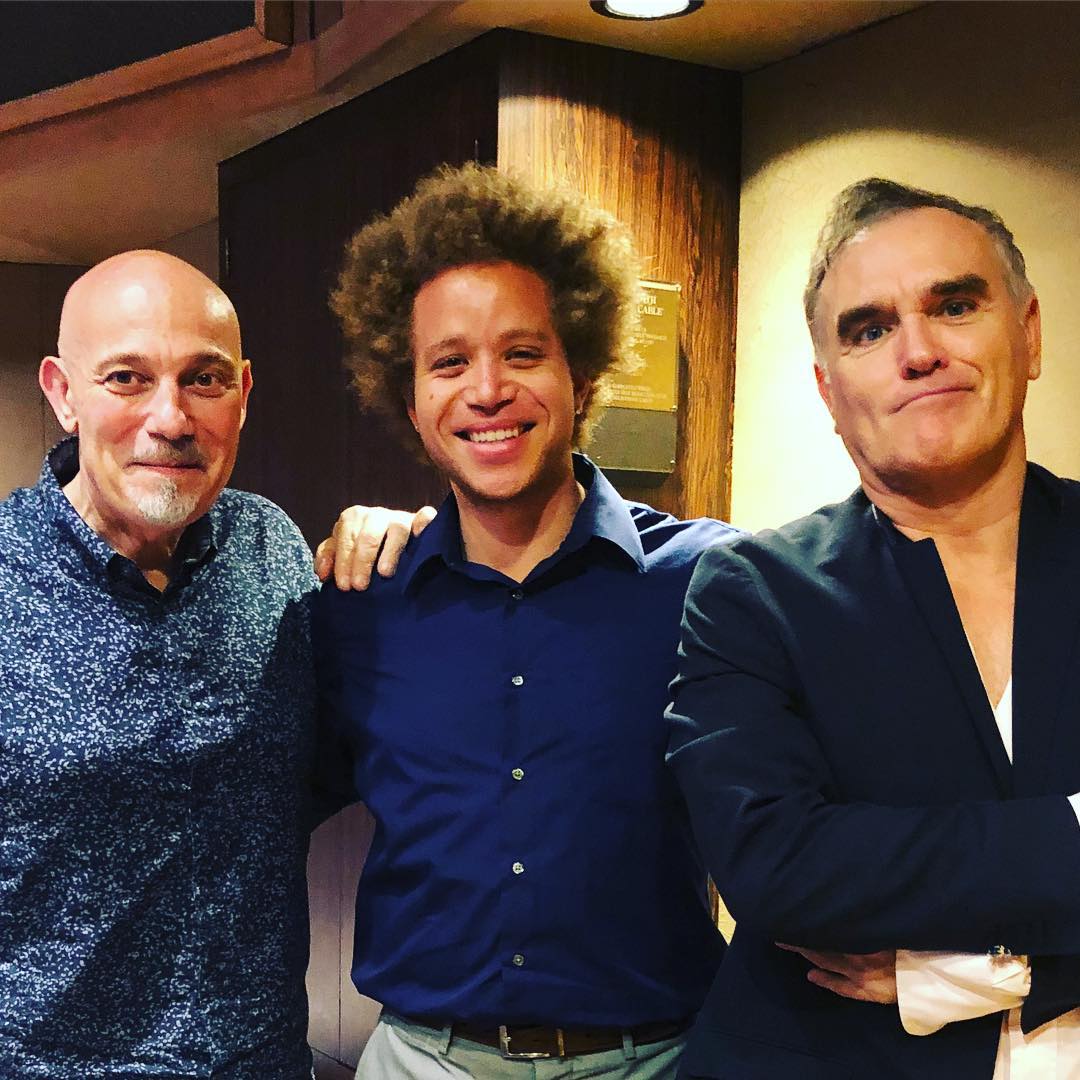 Only Brits and Hicks say "I reckon". I reckon I always found it interesting that Brittish immigrants to the Southern states of the USA (Hicks or Hillbillies) during the 1800's still have this common bond.

I reckon no one got the hint when I posted last week that Uncle Steve and the chaps were down at Sunset Sound recording all day once Boz showed up at LAX.

Anonymous said:
World Peace never clicked with me aside from a couple songs . It wasn't a bad album just personally didn't connect with me . LIHS however I love. A covers album though will sink like a stone without trace I fear .
Click to expand...

Fair enough. Quarry didn't click with me but it's adored by the masses so I know what you mean. It has great songs but there was something about it that leaves it unplayed for the most part.
Cue the vitriol...
Last edited: Aug 14, 2018
"It's not your bidet anymore."

marred said:
Fair enough. Quarry didn't click with me but it's adored but he masses so I know what you mean. It has great songs but there was something about it that leaves it unplayed for the most part.
Cue the vitriol...
Click to expand...

No vitriol form me on this one. a few GREAT songs on it but I never got the whole adoration for that album. I think the producing sucks and as an album it just never clicked for me either.
'The operation went well.....................but the patient died.'
A

It’s not the production. The engineering, mix and mastering are fine.

It’s the songs, band and singer that are shite.

My anonymous verification that allowed me to post this was perfect...

It might've been a mixture of seven years away from the game being a reason for it's adoration, but fourteen years on it's still loved quite a bit. I haven't given up on listening to it though. The cover art work turned me off too. The beginning of the "Can we get Mozzer to hold a prop?" series of sleeves.

On the plus side it did bring a swarm of quality B sides though. Some under the counter drugs hidden within the doctor's legal recommended prescription

(Re: post. That was supposed to be "by the masses" not "but he masses". Clumsy typing.)
"It's not your bidet anymore."

evennow said:
You forgot m8 innnniittt. I like AC's post as they often have me thinking in colors or seeing stars...one of the two. I keep trying to decode his posts like there is some deeper meaning behind them instead of simply a chicken pecking on the keyboard. Jury's out.
Click to expand...

His hackneyed "reckon" bit is soooooooooooo played out. He MUST know how goddamn annoying he is...right?

Johnnie Ray said:
His hackneyed "reckon" bit is soooooooooooo played out. He MUST know how goddamn annoying he is...right?
Click to expand...

I'm convinced that Aztec and vegan.cro.spirit #1488 are the same person.

Ketamine Sun said:
never cared for the Finn productions too. Not dirty enough for me.
Hope Joe C does a better job on this covers album. Though at the end of the day .... it's THAT VOICE that matters.
Click to expand...

Jerry Finn was a "dirty" producer in the past - see Rancid's "...And Out Come the Wolves", but Quarry hasn't aged well in some respects, but I think that's down to the songs. The snyths in particular are pretty bad.

the new album should be named : This is not Morrissey
A

No, the album should be titled: "Another Fart In The Wind"

It's pretty much what each new Morrissey release has become.

You're lucky if you get three good songs on an album now.

LIHS was a step backwards after the still born World Peace. He seemed to at least be breaking out of the stale chug rock template that he had rested on for the past twenty some odd years, but many of the song son LIHS went right back to it.

He has too many chefs in the kitchen, and no distinct sound.

I just don't see the point in releasing this kind of music as a geriatric. There are no more surprises, just an uninspired series of self-absorbed treaties set to mediocre music.
R

Anonymous said:
Wow you are so f***ing stupid. Do you think really that poor white trash are therefore not racist? Because there are sure as f*** more poor white people living on food stamps and Medicaid in this country then minorities. Are you even American? You don’t sound like it because you are f***ing clueless. I come from a minority in America and I don’t know one black person who lives in squalor or Mexicans for that matter. But I sure know poor white trash who are racist as f***. And still think they are superior to anyone of color. Racist assholes are not racist because of economics. This surely has been studied to death. It’s a fallacy. Equality for all is oppression for white people who are racists no matter what economic class they are in. I’ve had a friend be harassed and degraded by a homeless white man on the bus while my friend was on his way to his paying job! Is that because the homeless man thinks that minority is stinking up his street? No he thinks it’s his god given skin color that makes him superior. Don’t give me your racism in contemporary times wannabe intellectual bullshit. f*** off and keep defending Moz. The indefensible. You throw every god damn stereotype about black people living in squalor etc Jesus Christ it’s unbelievable some of the shit I see on this page.
Click to expand...

If you want to talk about fallacies, you're guilty of attacking a straw man.
If I can refresh your memory, you were talking about why a racist person might befriend a colored person. This is what I attempted to provide insight into.
I was trying to say that your KKK man wasn't necessarily a coward for claiming black friends, because this is how some racists think; not all racists, of course, but often the ones that make exceptions. (That's what I meant, at least. Perhaps I worded my "contemporary times wannabe intellectual bullshit" badly. Forgive?) The white trash you speak of that loathes everyone of color indiscriminately as they feel themselves to be superior are irrelevant to my argument.
The reason I won't refute the points you’ve made is because I mostly agree with them, and there’s really not much to disagree with. Yes, white supremacists exist… and in the job description of a white supremacist is the requirement to believe in the superiority of the white race. I know that much, and it doesn't touch on my point.

Your anecdotal evidence discloses nothing. Anyway, I'll let this speak for itself-
https://endhomelessness.org/homelessness-in-america/what-causes-homelessness/inequality/ StalinsPipe said:
I'm convinced that Aztec and vegan.cro.spirit #1488 are the same person.
Click to expand...

It's only fair, seeing as how Cro thinks that everybody is the same person.
B

Ugly Devil said:
I have no expectations, nor do I whine when people mark me as troll or redundant.
Click to expand...

No. You just whine about those you don’t agree with.

Morrissey_Sucks said:
No. You just whine about those you don’t agree with.
Click to expand...

Nope, I just rip the piss out of people like you and Skinny who spend your free time on here whining about Morrissey
I'm a gonna rearrange your face!
[SIGPIC]

scatterkeir said:
It's only fair, seeing as how Cro thinks that everybody is the same person.
Click to expand...

Sincerely, Simon Surface. Or is it Skinny Peppermint? I forget. I'm so many.

Sincerely, Simon Surface. Or is it Skinny Peppermint? I forget. I'm so many.
Click to expand...

You're StalinsSurfacePipe as well, remember?

StalinsPipe said:
You're StalinsSurfacePipe as well, remember?
Click to expand...

It's really hard to keep track of myself, honestly. Probably what the 23 in my name is about.

I couldn't help but notice that this cropped up in response to me calling out veegancro about multiple alts, all with the same style- re different sized colored fonts, similar emoji use, language, punctuation. I've only ever had this account and one other on here, and the only reason I have this one is I forgot the password to the old and the email associated with it is dead, so no chance at recovery.

Gotta love seein' a pic of Moz back in the studio.
Doesn't really matter if it's covers or originals to Wild T.
You must log in or register to reply here.