“We knew how we wanted to make ourselves feel. That’s a great reference point, I think Mike Joyce and the way he played with the Smiths, was just an incredible inspiration to me, just because of the sensitivity and power that he played with, and the grandeur that he played with, that I think Morrissey was never able to capture later. Those early Smiths records were face melting, just in the production. Nirvana was kind of the punk rock version of that.” 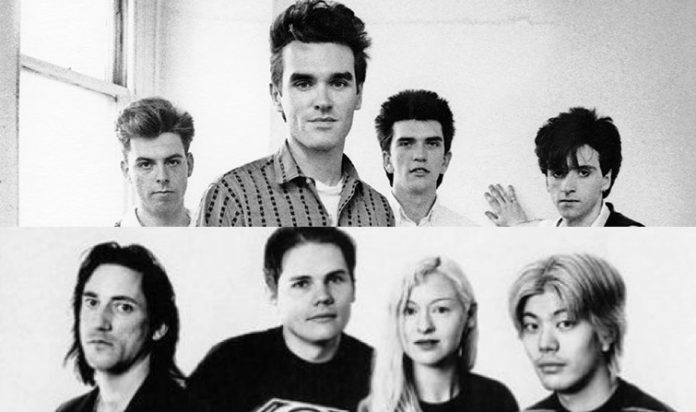 The brief article then segues in to a recap of recent live events with no real attempt at cogency.
Not the best of writing.
April 19th, 2017:
http://www.alternativenation.net/smashing-pumpkins-morrissey-lost-grandeur-of-smiths/
Regards,
FWD.
Last edited by a moderator: Apr 20, 2017
Click to expand...

Quando maybe but he also said he just didnt like the pumpkins in general. Butelys I just didn't get and lanterns was to obscure for me to get
A

Not sure the production on Hatful of Hollow was face melting, and drummers are easily replaced, same as the parts of a lawnmower so I'm told.
M

Another heroin addict complimenting another heroin addict The smashing pumpkins went on and did some great music without him or his dead keyboardist friend. The un-smashing pumpkins will forever be a foot note to Nirvana. The Smiths are a foot note to no one. Morrissey has excelled with out the group. Listen to “ Southpaw Grammer", " You are the Quarry" .
A

Anonymous said:
...and drummers are easily replaced, same as the parts of a lawnmower so I'm told.
Click to expand...

This is the kind of nonsense uttered by armchair critics and folks who don't possess the wherewithal to deconstruct what they're listening to. The rhythm section holds the entire band together. The oft-maligned drummer is key. Joyce + Rourke were the backbone of the Smiths. Morrissey hasn't come close to their caliber since. No need to talk lead/rhythm guitar. We ALL know that Johnny Marr can't be imitated, much less replaced. Just listen to the Smiths covers people are posting from his current tour, then go listen to the Smiths live. It's like karaoke with a terrible backing track.
A

Mike in Dallas said:
Another heroin addict complimenting another heroin addict The smashing pumpkins went on and did some great music without him or his dead keyboardist friend. The un-smashing pumpkins will forever be a foot note to Nirvana. The Smiths are a foot note to no one. Morrissey has excelled with out the group. Listen to “ Southpaw Grammer", " You are the Quarry" .
Click to expand...

OH YES. Dagenham Dave is definitely one of the greatest (s)Hits!
I don't understand Chamberlain's sentiment at all. When it comes to "grandeur" I would say that nearly all of Morrissey's solo albums have moments of it, if not in their entirety when you take albums like Vauxhall into account.
A

Chamberlain being quite humble to give props to Joyce.

I think Chamberlin is projecting, here. Morrissey has lost no grandeur. One listen to Viva Hate or Vauxhall and I confirms this.

On the other hand, the Pumpkins' tragedy--along with the demise of so-called "alternative music"--destroyed the Pumpkins almost completely. Especially when D'Arcy left. Recently, I watched the video for "Bullet with Butterfly Wings"--it was simply the worst video I've ever seen.

Moderator
On an interesting side note, The Smashing Pumpkins have been cited as one of the reasons that Peter Katsis was fired from Prospect Park - which ultimately led to his current day job and Morrissey's deal.
It's a small world n'est-ce pas?
For anyone interested:
http://www.billboard.com/articles/b...-katsis-jeff-kwatinetz-prospect-park-break-up
Regards,
FWD.
De gustibus non est disputandum.

Wilt(ed) Chamberlain is entitled to his opinion, but "reveals" makes it sound as if he's pulling back the curtain on a fact or anecdote nobody was privy to.
Get to f.
J

waiting for the followup where we learn why Smashing Pumpkins don't go away. They had about three good songs and I'd be embarrassed to enjoy any of them in public.

Rourke and Joyce were the rythm team of the Smiths.

don't talk about replacing, because the Smiths were Legend, are and shall be till their records exists, still influencing young teenagers...
[SIGPIC][/SIGPIC]

Ketamine Sun said:
Chamberlain being quite humble to give props to Joyce.

Chamberlain swings where Joyce can't even find the playground.
Click to expand...

Oh quit hating on Joyce because of the court stuff. Smoke a joint (or have a couple of drinks) and listen to Rank. He did a helluva good job after the first album.
A

ninetimesfined said:
I've never really been attuned to The Drums in any sense. I mean no offence by that - purcussion to me is simply... there.
Saying that, the drumming on the Island released Sparks records by Muff Winwood goes beyond simple pircussion and becomes a towering, dramatic wall of opera.
Click to expand...

It can't reasonably be just there. One of the major rifts the Pumkins had, was that Billy Corgan insisted on playing all the instruments in the studio. The other band members were there just to play live.

Billy played all the instruments in the studio except...the drums.

If I played drums well enough, I would rather play like 1st) Chamberlin 2) Walker 3) the guy from Cake....While not the 3 best drummers alive, I'd love to be able to play like them.
M

Mike Joyce is a great drummer – and this fact is constantly nullified because he took Morrissey & Marr to court and showed them to be greedy self-obsessed liars. That Morrissey should shuffle stagger on, whinging how unfair it is, even deflecting opinion away from his own unseemly behaviour by suggesting the court case stemmed from an establishment conspiracy to silence a dissenting pop star, is ludicrous. ‘Devious, truculent and unreliable’ is a pretty accurate summing up.

Apart from a few miss-steps, musically the Smiths were as close to perfection as any band could be. Business wise, Morrissey & Marr behaved in an utterly squalid manner.

Anonymous said:
Quando maybe but he also said he just didnt like the pumpkins in general. Butelys I just didn't get and lanterns was to obscure for me to get
Click to expand...

True, I don't like the Smashing Pumpkins in general. Or detail.
But I can hear they had a good drummer, just as Mike Joyce is a good drummer.
I just don't like the way the word grandeur being used and as if Moz lost that.
I have a problem with a drummer saying that.
If there is an artist embodying the word grandeur it is Moz.
In style, gesture and presentation.
It is a part of music too and not as unimportant as the "real" musicians seem to think.
"I love you Moz!" So when did you last see your psychiatrist, hmm?
"Yesterday. She said it was okay. She loves you too oo."
A

You have incredibly bad taste. Use your loaf.
A

Ketamine Sun said:
Chamberlain being quite humble to give props to Joyce.

Chamberlain swings where Joyce can't even find the playground.
Click to expand...

"The Smiths' sound rockets with meteroic progression: bomb-burst drumming, explosive chords, combative basslines, and over it all I am as free as a hawk to paint the canvas as I wish. It is a gift from Jesus."

Morrissey, Autobiography.
You must log in or register to reply here.

Jean Dawson: "I want it to feel like Manchester and Compton had a baby. I want it to be like if Morrissey was black" - DIY
2

Morrissey is a fan of Smash Mouth, apparently