Earlier this month, Spin dropped a goldmine into Google Books: scans of nearly every issue of the music magazine, from its May 1985 debut up through October 2009. And you can read it all for free, nerding out, page by page, through nearly 25 years of music history. With that in mind, we here at Slicing Up Eyeballs World HQ spent a good chunk of last weekend perusing the magazine’s late-’80s years, marveling at the ridiculously dated ads (mainly for beer, cigarettes and lots of blank cassettes, plus theKenny G-pitched Casio “digital horn” or MTV “Remote Control” occasional full-pagers), but also being reminded of how much space Spin bravely devoted to chronicling the AIDS epidemic and bashing the PMRC’s war on music.
Still, the main attraction was the ability to revisit Spin’s music coverage, which touched quite a bit on what, at the time, were the increasingly mainstream sounds of college rock and the indie underground, from American heroes The Replacements, Hüsker Dü and R.E.M. to Brit imports such as The Cure and Morrissey.
Below we’ve assembled links to some of the highlights of the key ‘85-’90 era (plus just a few later pieces), sticking to cover stories and features, but not yet delving into record reviews, to keep things somewhat simple. Just for fun, we’ve also thrown in links to many of the full-page ads for albums and tours (The Cure was perhaps Spin’s greatest musical advertiser of the era, with Elektra shelling out for everything from “The Cure in Orange” to the band’s little-remembered Integration box set).
Dive in yourself at Google Books, or just check out the direct links below.
See the highlights of Spin’s ’80s college rock era after the jump… 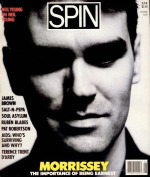 The Smiths
[June 1985 feature], [May 1987 Louder Than Bombs ad]
"If I knew where good songs came from I'd go there more often." Leonard Cohen
"I’ve always held the song in high regard because songs have got me through so many sinks of dishes..." Leonard Cohen

you can vote for this post being "the most interesting post of the year". And I am not kidding about.

Wonderful, my friend...
Many thanks to you....
"Those who murder language are not pure" - Camus

This is great, thanks for sharing!

You're a big man, but you're in bad shape. With me it's a full-time job. Now behave yourself.

Such a Nice Guy

Fantastic. Thanks a lot!
I know you love one person, so why don't you love two?
​

thankyou for alerting us to this, its fantastic.

Incessantly perverse adoration of Steven Patrick Morrissey​
You must log in or register to reply here.

The Smiths - The Catalogue 1988 - flexi disc and Morrissey poem - ebay