Link from an anonymous person: Anonymous said:
This is so shite it is not worthy of a BtBB response !
No more please !
Good for nothing 'Gary' !

There seems to be a contradiction here Benny!
Or this is not the real " thing "?
Just wondering if someone isn't very ambitiously copying your style!

Anonymous said:
You're a bigger f***tard than I thought. Killing animals for fun ain't the same thing as eating meat in the 1800s. Moron.
Click to expand...

wasn't comparing or saying there was no difference between 'Killing animals for fun' and 'eating meat in the 1800s'.

Lil' Sammy must have been working for months on his tribute photoshop picture of David Bowie reading 'List of the Lost'. It'll be a doozie when it finally arrives!

No one else finds this image a little tasteless?

What, no picture of Fidel Castro holding a 'First of the Gang to Die' 45'?
"Harassing fellow forum goers since 1997"
A

£10 says when Kirk Douglas passes we get one of him in his Spartacus thong, with 'Your Arsenal' photoshopped onto his butt-cheeks.

as a lee fan for forty years I thought I had seen every photo of bruce but the ones on the beach are new to me,fantastic.
its not me its you.

Anonymous said:
£10 says when Kirk Douglas passes we get one of him in his Spartacus thong, with 'Your Arsenal' photoshopped onto his butt-cheeks.
Click to expand...

Just make sure that's a meat-free tenner you're waging, buster..!
A

...Or indeed a mid-sized transport vehicle?
A

Or a cheesy seventies singer
A

Anonymous said:
From Wikipedia "His favorite pastime was hunting geese, duck, elk, and other big game."
Click to expand...

Yes, that is all true.

But apparently Moz found him attractive so all is forgiven?

I remember a time when Morrissey was the greatest interviewer ever. He was like Krusty the Clown when Krusty started doing stand-up comedy before he sold out.

Morrissey called out every interviewer brilliantly when The Smiths were together and for a few short years after.

Quando quando quando said:
I don't know for sure Rifke, but it might be a result of a great number of immigrants coming from The Netherlands during the early fifties of the previous century.
I know, in that time, more than 100.000 immigrants left their country, going to mainly, the United States, Canada and Australia.
Many people here have as part of their last name the suffix van, or like in Belgium, Van.
In stead of using the first name people got used to be called Van and so it developed as a first name.
Don't know anything about Dutch roots of Van Williams.
Click to expand...

that's how i read it, as though it's part of their last name, and it's like im still waiting for their first name, or wondering if they've just decided to use their last name. before i knew who morrissey was i used to get him and van morrison mixed up for this reason.

on a related note you dutch people have funny names. i know one old lady named hillegonda. what's with that? she reminds me of big bird which i guess is what you get when you name your kid hillegonda. gerrit is pretty normal though, i guess. i like it anyway.

not as bad as german names though, like waldtraut. what the f***s a waldtraut?

These montages by a certain Moises Soriano Valiente have been around Instagram for a few months. 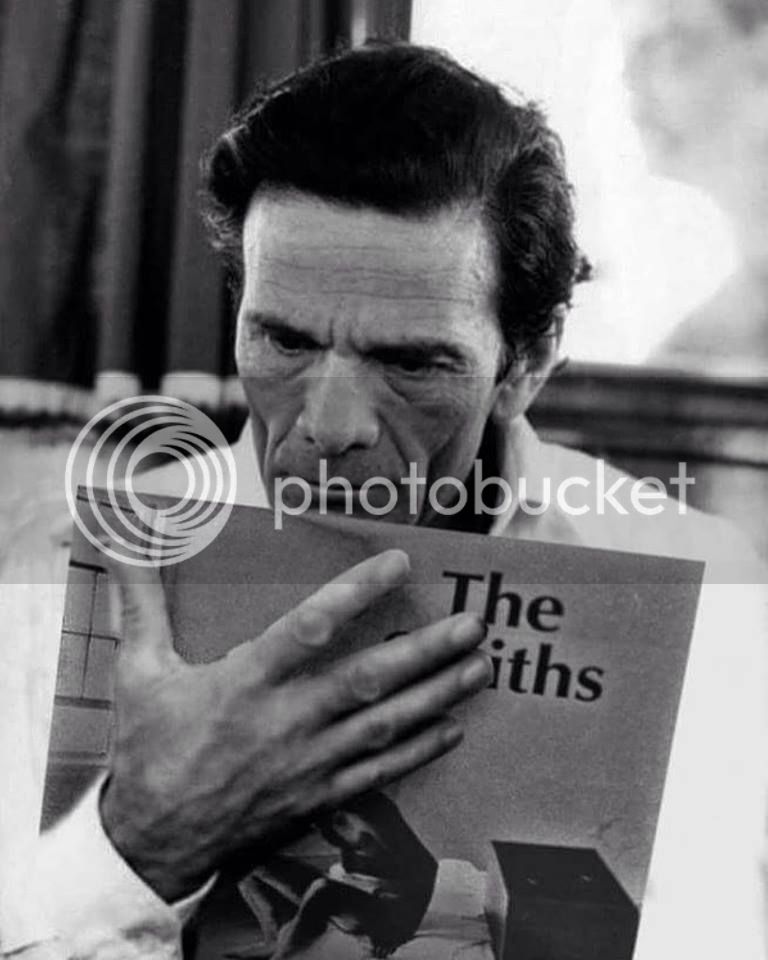 Well, I have to say, they are quite good!

Was he inspired by Sam or Sam by him?
Who was first?
Like the Pasolini photo.
Can't I make it as my avatar or do I have to create an account on Instagram? In that case no.

rifke said:
not as bad as german names though, like waldtraut. what the f***s a waldtraut?
Click to expand...

Well, wald is forest.
Traut, I don't know.
Sounds like some kind of she-devil from the forest.
Hillegonda I reckon is a very old name.
From 15th or 16th century.
Gerrit is not uncommon here.
But a bit old-fashioned too.
I wasn't allways comfortable with it.
I was named after my father as his first born son.
I know it's not your real name but I quite like Rifke.
Names are important in human psychology.
There is a certain emotional value to words and surely to names.
It's many times unconscious and hard to explain why we like names or dislike them.
"I love you Moz!" So when did you last see your psychiatrist, hmm?
"Yesterday. She said it was okay. She loves you too oo."
A

These ones wee first.
A The Hunter.
You must log in or register to reply here.