the heart is deceitful above all things
I rented this dvd to see Marilyn Manson acting actually so some of you will say I got what I deserved. It isn't that there were no good scenes or that there wasn't a possibility for a good movie somewhere in this mess. I even like some of the actors. I hate that this thing is viewed as some sort of artistic achievement though because it's just a real pile of trash, and I don't mean that in a good way. It's full of child abuse for one thing and it isn't as if there is any message conveyed through this, it's just completely gratuitous.
The actress who plays the mother is listed on the DVD cover as giving a "fearless" performance but it's all a bunch of courtney love retread along with a couple of sections that seem to be inspired by that Metallica video with Ginger Lynn.
It's got Sonic Youth on the soundtrack and they really should know better, but now that I think of it they do get involved with some pretty stupid and trendy people.
It's got lots of people that have good credentials really but I think they must have all been forced to appear in this. Maybe it was part of some deal with satan.
I was left hating the whole hipster scene more than I already do and I realize that punk rock really did die a long time ago. I loved the sex pistols and was sickened to see the way they were used in this film as if to lend some sort of authenticity or whatever the intent was.
don't rent this thing. ignore it. if I've somehow made you think it was interesting or "hip" believe me it's boring. there is no real story. things happen for 80 minutes or whatever and then the story ends unexpectedly but there is no sense to it, no central story arc, no beginning middle or end. I'm sure that you could watch the scenes in random order and it would be just as intelligible.

Why do I care? It's because this thing is being treated like it is some kind of important film and because it's full of a bunch of the sort of people that should just do everyone a favor and take a fatal overdose. The sections with these people being interviewed and attending a premiere were pathetic. It appears this scene they are involved in is a big circle jerk selling garbage to their deluded followers. they took all of these things that are cliches and tried to make them dangerous and they wound up just being boring, stupid, and offensive and I don't mean "controversial", I mean like a backed up toilet.

this movie was the worst i have ever seen if i had not been high during it, i would have died
&
btw
i liked
the heart is deceitful above all things 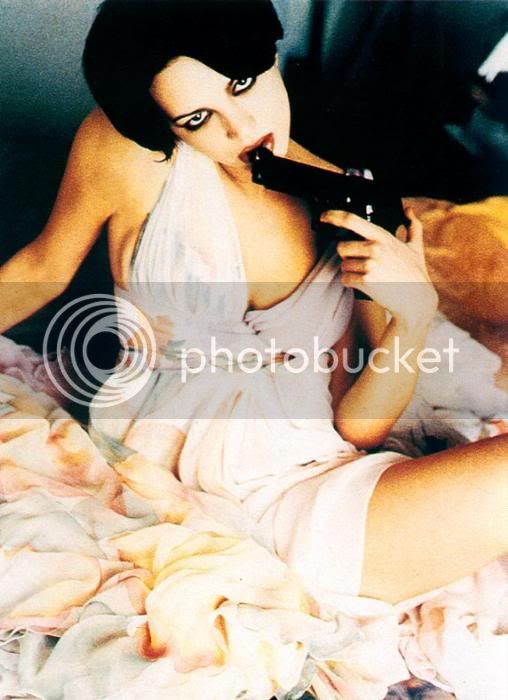 its got to be "big busty nurses", they werent that busty at all and there wasnt enough action for my liking
HEY, WHY THE LONG FACE ?

If The heart is deceiptful above all things is the worst film you've ever seen, I guess you only watch masterpieces

Barbra Streisand's "Prince of Tides". It's a film for boring old farts, and the scene with the small children being raped by the escaped convicts was just horrible. Thanks, Barb! Also... the cliched love scenes... oooh, shagging on the rug by the fire.... yawn yawn yawn....

However, bad films I enjoy.... Patrick Swayze's "Roadhouse". Legendary lameness!
For all the latest news on Morrissey's tea-pot collection:
www.prettypettythieves.com

Gladiator Cop....then lets not ever talk about that again
For today i am a bird

"The Da Vinci Code" has to rank right up there. Most "bad" movies I rather like, because they know they're bad. "The Da Vinci Code"-- and just about anything by Ron Howard-- had an air of seriousness about it that disgusted me.
D

I agree Worm. In my opinion anything with Tom Hanks has this quality as well.

However, I would like to see a movie where Opie is a corrupt detective in NYC.

Worm said:
"The Da Vinci Code"-- and just about anything by Ron Howard-- had an air of seriousness about it that disgusted me.
Click to expand...

Cinderella Man was pretty good...despite most of the characters being one-dimensional. I didn't see it in the theater because I don't like Ron Howard either, but I should've.

Worst movie of the past few years is obviously the outrageously deceitful propaganda film, Farenheit 9/11. But hey, Hezbollah, Syria, and the Iranian mullahs sure loved it.....
Last edited: Jun 22, 2006
I'm just a boy with a heart full of love
D

Oh my god said:
btw
i liked
the heart is deceitful above all things
cuz asia argento is dreamy

I happened to see her in two movies tonight just by chance, Last Days which was pretty good and Land of the Dead which was great.
If you care about Last Days I'll imagine you've seen it. My favorite scene was the one with Kim Gordon. I am a fan anyway but it was great to see her performance and she had great lines. I was hoping she would reappear. I am also a fan of Michael Pitt but I like Bully and especially Hedwig and the Angry Inch a lot better. Part of the problem is that somehow a movie about Kurt Cobain seems sort of silly to me. I like bad bio-pics but I know that this is supposed to be taken seriously as a film and I couldn't completely do that.

Land of the Dead would probably make lots of people's lists as a terrible movie but it was fun to see Dennis Hopper pick his nose and say "Zombies creep me out".

Dave said:
Land of the Dead would probably make lots of people's lists as a terrible movie but it was fun to see Dennis Hopper pick his nose and say "Zombies creep me out".
Click to expand...

yes, ive seen it & have it
also im lookin 'forward to' seeing her get her head chopped off in
Marie Antoinette
Asia plays Madame du Barry, Loius 15's mistress
famous for her last words
'Encore un moment, monsieur le bourreau, un petit moment'
translates to
'Just a moment, executioner, a small moment'
You must log in or register to reply here.

S
The Carry On films
2