Difference between revisions of "My Early Burglary Years" 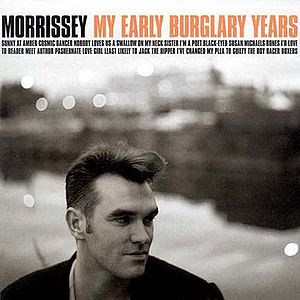 Some releases hold a black sticker saying: A collection of rare tracks including a previously unreleased version of "COSMIC DANCER" and a multi-media bonus: a rare video of "SUNNY" 2-46874 (#1) On the back cover it says "Due in stores September 15, 1998 Promotion Only. Not For Sale." My Early Burglary Years is a compilation album by Morrissey that was released in September 1998 in the United States on Reprise Records. It follows in the tradition of his previous compilation albums Bona Drag and World of Morrissey in that it collects various single a-sides and b-sides, some album tracks, live tracks and previously unreleased material.