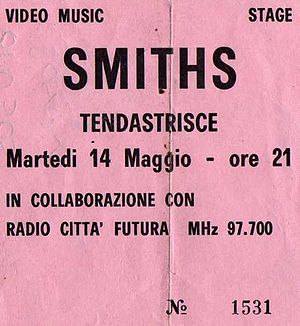 This concert was released on the Live In Rome 1985 bootleg LP. However, this is an incomplete release of this concert. The following songs are omitted: Nowhere Fast, What She Said, That Joke Isn't Funny Anymore, Shakespeare's Sister, Rusholme Ruffians, Meat Is Murder, Miserable Lie and You've Got Everything Now.

A lossless version of the complete concert is available at Smiths Torrents. MP3 versions are available at the usual places.