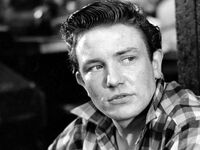 Image used for promoting the 2016 tour and also as a backdrop during Shoplifters Of The World Unite (video source).