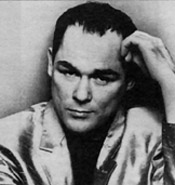 William MacArthur "Billy" MacKenzie (27 March 1957 – 22 January 1997) was a Scottish singer, with a distinctive high tenor voice; he was best known as a member of The Associates.[1]

"Billy Mackenzie, the hugely influential singer who began his career with The Associates, was found dead in a garden shed outside his father's home in Auchterhouse, near Dundee, on January 22. He was 39."

... "Morrissey, a friend and fan of Mackenzie for some years, said: 'He was such a lovely person, and I feel very, very sad.'"

Morrissey gets a teasing mention in Tom Doyle's book; 'The Glamour Chase - The Maverick Life Of Billy MacKenzie': (this extract is from pages 191 - 192):

"By May, six tracks of new MacKenzie/Rankine material had been completed. Retrospectively, the most musically startling and lyrically intriguing of these is undoubtedly the insistent glam rock of 'Steven, You're Still Really Something'. In the early 80s Billy had forged a fleeting friendship with Morrissey, which had allegedly ended with MacKenzie stealing a Jane Stein novel and a favourite shirt from the singer's Manchester flat. The music industry rumours that the two had enjoyed a brief affair were fuelled by the release of the Smiths' sixth single, 'William, It Was Really Nothing', in September 1984. If then, 'Steven, You're Still Really Something' is more than likely MacKenzie's response song, it is nothing if not likely affectionate, with even the vaguely threatening 'outing' line 'If I'm going down, I'll do you down with me' sweetened by the coupling 'And I loved the way you sent your poetry'.

Billy's song in question has not been officially released but since his suicide in 1997 there has been renewed interest in both his solo work and that of The Associates. This summer will see the re-release of much of his work including CDs of previously unreleased material and this may include the above mentioned song. Anyone who is interested in Billy can find out more information at this excellent fan run site: http://www.billymackenzie.com