Several stills of Charles Hawtrey from the Carry On films were mulled over at various times. Morrissey's affection for both Charles Hawtrey and fellow Carry On star Kenneth Williams was very particular and very personal.

In a statement describing Hawtrey as "The very last comic genius" in November 1988, Morrissey said: "Charles Hawtrey's death ties in with the advance chill of 1992, the slaughter of the British passport, and the last death wheeze of the real England... By all accounts being unfriendly and friendless, Hawtrey's mystique surpasses Garbo. I personally loved him." 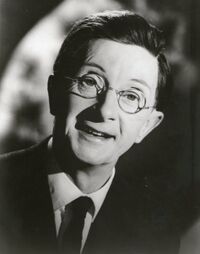 Photo used for the cover of Very Best Of...

George Frederick Joffre Hartree (30 November 1914 – 27 October 1988), known as Charles Hawtrey, was an English actor, comedian, singer, pianist and theatre director. Beginning at an early age as a boy soprano, he made several records before moving on to radio. His later career encompassed the theatre (as both actor and director), the cinema (where he regularly appeared supporting Will Hay in the 1930s and 1940s in films such as The Ghost of St. Michael's), through the Carry On films, and television.