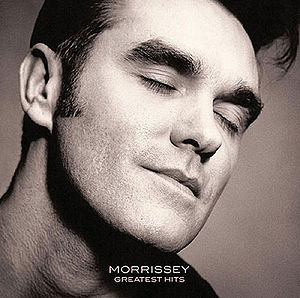 US "Live At The Hollywood Bowl" bonus CD

Released in double gatefold cardboard case (artist's name and album title are purple embossed on front and again on rear with the Morrissey and Decca logos also embossed) with two inner card slipcases and initial copies included an artcard advertising a special new release exclusively for pre-order only via the Morrissey site.

Tracks 1-6, 1-13 and all tracks on CD2 are previously unreleased material. Greatest Hits is a compilation album by English singer Morrissey, released on 11 February 2008. Unlike 1997's greatest hits, Suedehead: The Best of Morrissey, this compilation predominantly features songs from the then previous two studio albums, You Are the Quarry and Ringleader of the Tormentors. The album also features two new songs, lead single "That's How People Grow Up" and "All You Need Is Me", both of which were later included on studio album Years of Refusal.