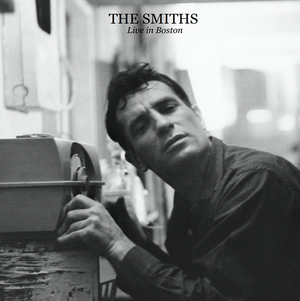 Image of Jack Kerouac used in The Queen Is Dead deluxe edition, 2017

In Kerouac's The Dharma Bums (1958), the character Ray Smith recounts:

"Pretty girls make graves," was my saying, whenever I'd had to turn my head around involuntarily to stare at the incomparable pretties of Indian Mexico.

Which Simon Goddard asserts as an influence on The Smiths' Pretty Girls Make Graves. His image alongside Neal Cassady was used as a backdrop for the live debut of the song "Kerouac's Crack" (September 28, 2022).

Jean-Louis Lebris de Kérouac (; March 12, 1922 – October 21, 1969), known as Jack Kerouac, was an American novelist and poet who, alongside William S. Burroughs and Allen Ginsberg, was a pioneer of the Beat Generation.Of French-Canadian ancestry, Kerouac was raised in a French-speaking home in Lowell, Massachusetts. He "learned English at age six and spoke with a marked accent into his late teens." During World War II, he served in the United States Merchant Marine; he completed his first novel at the time, which was published more than 40 years after his death. His first published book was The Town and the City (1950), and he achieved widespread fame and notoriety with his second, On the Road, in 1957. It made him a beat icon, and he went on to publish 12 more novels and numerous poetry volumes. Kerouac is recognized for his style of spontaneous prose. Thematically, his work covers topics such as his Catholic spirituality, jazz, travel, promiscuity, life in New York City, Buddhism, drugs, and poverty. He became an underground celebrity and, with other Beats, a progenitor of the hippie movement, although he remained antagonistic toward some of its politically radical elements. He has a lasting legacy, greatly influencing many of the cultural icons of the 1960s, including Bob Dylan, the Beatles, Jerry Garcia and the Doors. In 1969, at the age of 47, Kerouac died from an abdominal hemorrhage caused by a lifetime of heavy drinking. Since then, his literary prestige has grown, and several previously unseen works have been published.