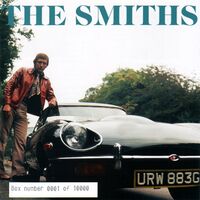 Joel Fabiani featured as the cover star on The Smiths Singles Box.

Joel Fabiani (born September 28, 1936, in Watsonville, California) is an American film, television and theater actor. Known for his leading role in the British TV series Department S, Fabiani has guest starred in The FBI, Barnaby Jones, The Streets of San Francisco, Banacek, Cannon, The Rockford Files and Starsky and Hutch. His film appearances include Looking for Mr. Goodbar (1977), Reuben, Reuben (1983) and Tune In Tomorrow (1990), and he has also had recurring roles in soap operas such as Dallas, Dynasty, As the World Turns, and All My Children.