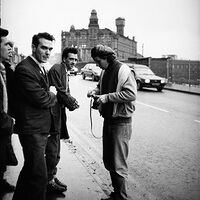 Watson pictured with The Smiths

Lawrence Watson was born in Hammersmith, London, in 1963. In 1979 he left school aged 16 and undertook an apprenticeship at a darkroom in Old Street. He then graduated to a darkroom at London Weekend Television, and whilst there developed his portfolio in the evenings at the weekends and began contributing to the New Musical Express.

In the early '80s Lawrence was commissioned to document the emerging New York hip-hop scene and his portraits of legendary artists from that era include Run DMC, Eric B, Rakim and Public Enemy.

British photographer (born: 1963 in Hammersmith, London). Since the early 1980s he has worked with many acts; notably in the NY hip-hop and UK Indie scenes.