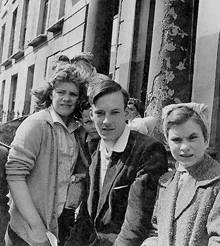 Morrissey has featured several of Mayne's photos on record sleeves and during the 1997 tour as backdrops.

Photos used as backdrops on the 1997 tour:

Roger Mayne (5 May 1929 – 7 June 2014) was an English photographer, best known for his documentation of the children of Southam Street, London.