Tiger Army covered The Loop for their Ghost Tigers EP (2004).

Alain Whyte would later contribute to the band's [Music From Regions Beyond] album (2007) and [appear live] with them.

Tiger Army is a three piece psychobilly band from California. Fronted by Nick 13 (Kearny Jones) on guitar with Djordje Stijepovic on upright bass and Mike Fasano on drums

Track B2 is a cover version of The Loop by Morrissey. 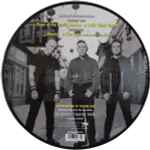 Tiger Army is an American psychobilly band based in Los Angeles, California. The group was formed in 1996 in Berkeley, California, and its only constant member is singer, guitarist, and lead songwriter Nick 13. The band has released six studio albums and four EPs.