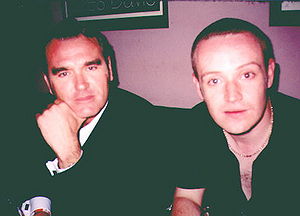 ...Gene will forever be haunted by comparisons to the Smiths, especially since lead singer Martin Rossiter favors the same strangled croon and tortured loneliness of Morrissey. Nevertheless, under the direction of guitarist Steve Mason, Gene developed a tougher sound than the Smiths, drawing not only from the fey tradition of British indie-pop, but also from the three-chord raunch of the Faces, the working-class punk of the Jam and the soulful stomp of Motown. Most critics didn't hear such subtle differences, and opinions on the group's worth were fiercely divided upon the release of the group's first single in 1994, with the band earning as many detractors as supporters. Amidst such divided reaction, Gene developed a devoted following which helped them become one of the leading artists of the Britpop second tier in 1995, even if the band had trouble breaking into the States. [2]

...Until the release of the group's debut album, Olympian, in the spring of 1995, Gene had continued to build momentum, partially because Martin Rossiter had adopted Morrissey's technique of giving articulate, outrageous and witty interviews.[2]

It has been noted that the name of the band Gene was named after the Smiths b-side "Jeane".[3][4][citation needed]

Throughout your time with Gene, you were routinely compared with Morrissey. How much of a burden did that become?

I liked The Smiths a lot. From an early age, I’d always felt a sense of “otherness” and, to me, The Smiths were the musical manifestation of that otherness. I enjoyed the fact that Morrissey would use language in a way that was very different from any other singer of the time. Morrissey did cast a long shadow and became a kind of shadow that I could never quite get away from. I did get fed up with the comparisons because his name would keep coming up whenever Gene was written about. The comparisons came up because, like Morrissey, I sing in an English accent which is surprisingly rare when you think about it. Like Morrissey I sing with a vibrato. I suppose we both have an interest in the human condition. But, as far as I’m concerned, that’s where it ends.

Martin Rossiter on the joy of Morrissey

When I was young I felt a sense of 'otherness'. I still do. And more so even than REM or Husker Du (two other pivotal guitar groups of the time whose singers were queer), the Smiths were the musical manifestation of that otherness. In 1983, in a country that was embracing consumerism and letting its government introduce homophobic legislation, Morrissey provided a voice. It was a voice that was overtly political because it celebrated otherness.

Despite Morrissey never publicly declaring his sexuality, the message was clear. It is OK to be 'other'. In fact, that otherness should be celebrated with intelligence and style. It should dance on the streets, dust down its bunting and stick two nail-varnished fingers up at Thatcher's Britain.

Radio 1 Newsbeat speaks to Martin on Meeting his Idol...14th July

Martin: "I'm still quite good friends with Alain Whyte who is a-hem (coughs)'s guitarist. He lives in Los Angeles with his girlfriend Blossom, he rang me up and said: "Hi, I'd really love to see you mate" and he brought him with him. He was large, actually, quite a big feller, that really surprised me. A bit like Tony Blair, he's really big, that surprised me when I met him. He was huge. Huge!! It really was quite exciting, I mean I bought his records, and it's always lovely to meet people who when you're 14 you'd listen to their records. And he was quite shy and I was quite shy, and beer was drunk... and that was about it. And we talked about... well I don't know what we talked about because I was pissed."