The high street has fallen for the rock T-shirt with classic designs on sale in every teenage chain store. Here, (older) Times writers show off their originals.

Never mind been there, these days you don’t even need to have done or heard that to get the T-shirt.
Whether Gigi Hadid is au fait with the Rolling Stones’ back catalogue or Kourtney Kardashian really is a Metallicahead is anybody’s guess, but these instantly recognisable hot lips and rock skulls have become fashion logos in their own right.

On the high street they’re cool girl/indie boy signifiers that look good on Instagram and don’t need context. Topshop’s £12 Whitney Houston tee is aimed squarely at shoppers who were born a good decade after her pomp, while H&M’s the Who motif (£12.99) is just as likely to be a question as an answer among the Gen Z-ers who wear it. Why bother grandad for his 1977 Led Zeppelin T-shirt when you can buy it for £27 from Brandy Melville?

At fashion week the number of AC/DC fans among the street-style contingent seems disproportionate to their presence in the record-buying public. Peter Saville’s designs for Joy Division are a perennial favourite among menswear editors. In a move that was equal parts post-ironic and cynical, the cult label Vetements bypassed the band altogether for its Iron Maiden-esque T-shirt and slapped its own name on there.

Among a righteously devoted few, gig tees are collectors’ items. An original Run DMC top can net as much as £10,000, a limited-run Nirvana crew shirt £3,000. If you’re prepared to part with Prince’s Purple Rain muscle vest, it’ll pay for a new car.

For the rest of us they’re a connection to our youth, however misspent. Here, Times writers share theirs.

Kevin Maher, chief film critic: Morrissey
I bought my first Morrissey T-shirt when I was 13. I had seen him on Top of the Pops and knew, instantly, from a single performance of Everyday is Like Sunday, that he represented everything that was good in the world — shyness, bookishness, a lantern-jawed manliness that was leavened with femininity and, crucially, the perspective of alienated outsider. I have 32 Morrissey T-shirts. I’ve worn them all my life. To everything. Even weddings — yes, I am that middle-aged man who thinks that he’s “happening” because he’s thrown a blazer over his Morrissey T-shirt. And the T-shirts, in turn, have been good to me, especially for work. You wouldn’t believe the number of Hollywood stars, young and old, who love Morrissey (basically, all of them) and who have thus melted, as interview subjects, before we’ve even begun (“Oh, I just adore your T-shirt!”).

Yet, alas, things have soured between the T-shirts and me. And it’s Morrissey’s fault. The music has been replaced by increasingly reactionary statements, including, recently, grim support for the UK’s extreme political right (for example, Tommy Robinson and Anne Marie Waters). Morrissey no longer, for me, represents everything that’s good in the world. And the T-shirts, for now, are under lock and key.

...the article goes on to discuss other columnists and their t-shirts. 32 tshirts,impressive.wonder if anyone on here can beat that.his article was going so well until he provided the stock answer at the end.
its not me its you.

havent old rock tees always been a thing? dsquared2 did the "iron maiden-esque" t-shirt long before vetements did

ireg you should lay them all out and take a snap and let us all have a look at your collection,on a sunny day how do you choose which one to wear.
its not me its you.
S

Dang, I have a large bin with dozens of Moz/Smiths shirts.. I wonder if they would even fit me 30 some odd years later.. I may need to dig them out.

Huh. I have an original Run DMC King of Rock shirt that I never wear. I wonder if I could make a few bucks on it. 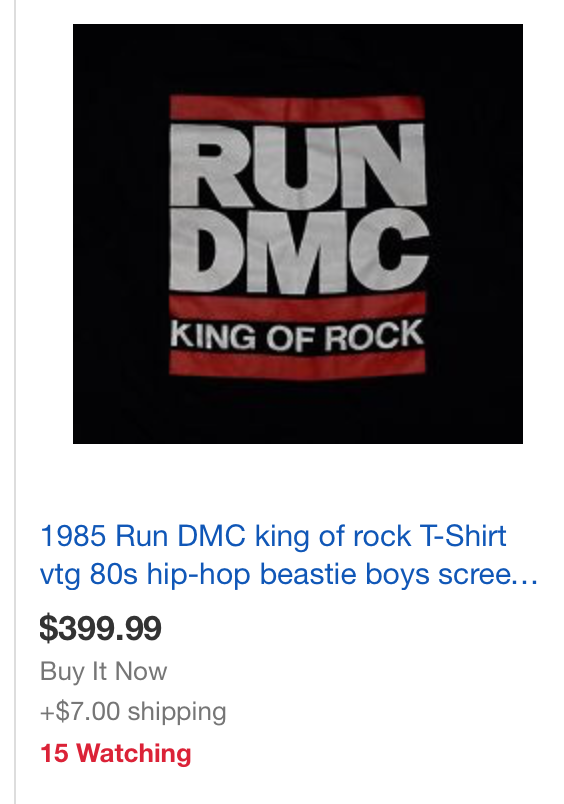 And that's the only one on ebay, mine is in similar shape with slightly more fading, so I'm thinking $300?
Last edited: Aug 29, 2018
You must log in or register to reply here.

A
The Smiths music prominently featured in Transformers' spinoff Bumblebee film (out Dec. 21, 2018)