Such wonderful news. Deserves a hearty congratulations to M.
Could there ever be lack of interest from a suitable label after this?

And on TTY, Matthew Walker back on the drums. Just wonderful!


TheBoyWithTheDragonTattoo said:
Is this invite open to everyone??
Click to expand...

What? Accepting an award from 'dictators'?

I remember Gustavo said he's written some songs. Will be interesting to see what "sound" they have.
S

Thank bog that Matt Walker is back on drums, that last drummer was weak, didn't bring the oomph like Matt did behind the kit. That Bravery drummer really dampened all the shows I saw on the last tour, I can't believe one of his shows made it onto DVD
C

Nobel Peace Prize Concert? why legitimize such a horror of an event.
him and brand don't want people to vote but he is singing at an event that gave Obama a peace prize?
i'm no right winger but how are you promoting peace by expanding war in n Africa and the middle east.

manalive said:
Dean 'Deanooo! Deanooo!' Butterworth was / is by far and away Mozzers no.1 drummist post-Smiths. One charismatic, handsome bastard.
Click to expand...

Matt's good, but for me, technically the best drummer Moz has worked with is Andrew Paresi. A pity he never got to play live.

We are all we Need

http://news.yahoo.com/norway-frowns-morriseys-presence-nobel-concert-151329542.html
IF YOU CANNOT STAND THIS FAKE WORLD, TAKE MY HAND
5

Think its brilliant and shows how iconic moz is.he'll show up but - but probably be a bit lady gaga esque and do something biazzare ( no meat kecks though!
A

Anonymous said:
Matt's good, but for me, technically the best drummer Moz has worked with is Andrew Paresi. A pity he never got to play live.
Click to expand...

Seriously, though. Even from this dodgy clip you can tell he's the best drummer Morrissey has worked with. Not a mention in Autobiography, though.
A

Unknown to most outside of Sweden, this is Zara Larsson singing at a swedish summer tv show this year:

Hope Morrissey sings one or more of these: I Will See You In Far Off-Places ("destiny for some is to save lives, but destiny for some is to end lives"), I Know It's Gonna Happen Some Day (uplifting), Art-Hounds (to show he's still got it), Scandinavia (well, this says itself) and perhaps Bigmouth Strikes Again....
A

why is it ok to perform in Norway where they hunt seals but not in Canada ????????

Morrissey has paid a beautifull and lovery tribute 2 slaughted/murdered innocent childern in norway, hes expressed his deepest sympathy and despair and sorrow for these poor children there faimliy and friends, and at the same time spoke out and highlighted the horrific torture and unimaginable cruelty and treatment towards the milllions of other innocent beings (farm yard animals ect)
(Which order hes paid tribute and has spoken out against animal cruelty and the murder of innocent children in noway ect is irrelevant ! and has no bearing whatsoever ! )
Hes spoke about both and expressed his deepest sympathies for both !
Both are just as important as each other!!!!!!!!!!!!!
The very caring, understanding and civil people ect including those in norway acknowledge his kindness, compassion and empathy for humans and other beings alike!
The other cruel, greedy and selfish ones amongst us may not !
Yes people are on benefits and just drink cider all day and so are 2 sick 2 work - sick and tired of this f***ing country!!!!!!!!! - Steven
A

So what he sang was:
People Are The Same Eveyrwhere
Satellite of Love
Irish Blood, English Heart

Not really impressive, at lest not the first two songs.

He played "People are the same everywhere", "Satelite of Love" & "Irish Blood, English Heart". He wore some gigantic sweatpants and his band "Hustler"-tshirts Sweet 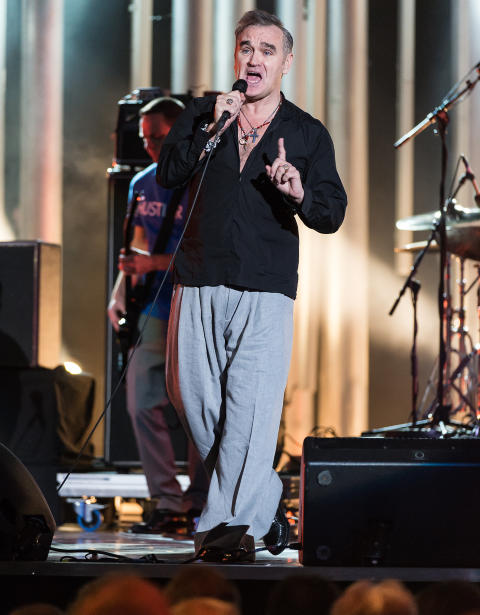 What the f***'s he wearing?
You must log in or register to reply here.

S
"War of words breaks out in Norway over Morrissey’s Nobel Peace gig..." - The Independent
2

Dec 7, 2013
Anonymous
A
T
"This Charming Man": Morrissey interview by Sean Smith in The Big Issue in the North, 15th November 1999 (transcribed here for the first time)